Rare native birds that love to stop over in some of the Mackenzie Basin’s tiniest alpine lakes and remote wetlands will now have a safer trip, thanks to the completion of a major biodiversity project. 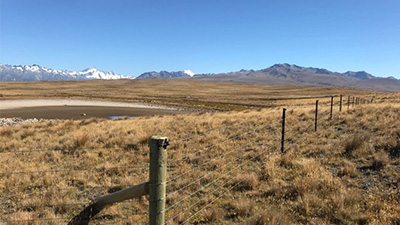 Fencing of two tarns (small alpine lakes) and a large wetland has now been completed at Balmoral Station near Lake Takapō/Tekapo, as part of a joint project supported by the Upper Waitaki Water Zone Committee.

Nearly 4000 metres of fencing has now been erected at Balmoral for this project, funded by the landowners as well as $24,000 of biodiversity funding.

The completed fencing, which helps to improve water quality and habitat, will protect migratory species such as black-fronted tern, banded dotterel, New Zealand Pied oystercatcher, as well as important locals like the kakī black stilt.

“The tarns and wetlands located in this area near Lake Takapō are so unique. They are important to rare native species who use the tarns as part of their migratory lifestyle, as well as birds like our critically endangered kakī that call Mackenzie home.

“It’s great that the zone committee and Environment Canterbury can support landowners taking voluntary steps like this to improve biodiversity on their land.” 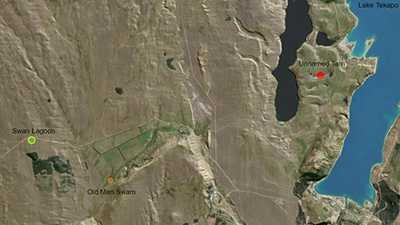 As well as supporting native birds, tarns in this area also host many tiny and vulnerable plant species that only grow in these microclimates, including Hypericum rubicundulum and Carex rubicunda.

In addition, the landowners at Balmoral Station also fenced an area called Old Man Swamp (main photo) - a large, diverse wetland that supports a wide variety of native tussock, grass and rush plants and is an important mahinga kai resource for local rūnanga.

Sam Simpson, from Balmoral Station, said the fencing project was part of their overall farm management plan that focuses on the sustainability of their environment. The plan is broken down into smaller land management units which include detailed information on soil types, at-risk species and native plants.

“We know we need to have fencing in place to protect all our special places,” he said. “It just makes sense to us to farm sustainably and look after what we’ve got here.”

Supporting projects that protect and enhance biodiversity is important to the Upper Waitaki Water Zone Committee. To find out more about the joint committee, head to our Upper Waitaki water zone page.

Feature image: This large wetland, known as Old Man Swamp, has now been entirely fenced from livestock thanks to the joint biodiversity project.

Six projects in the Upper Waitaki zone have been recommended for $95,000 of Immediate Steps funding supporting environmental values.