The Plan guides land transport planning and investment in the region and informs the Government’s development of the National Land Transport Plan and transport funding allocations.

It is prepared by the Regional Transport Committee, a collaboration of the region’s Councils and Waka Kotahi NZ Transport Agency.

A shift in thinking

The Regional Transport Committee’s chairman, regional councillor Peter Scott, says the Plan represents a shift in the region’s thinking about what is important as the transport network develops over time.

“The recent flooding, the 2019 Rangitata flood and the 2017 floods put an exclamation mark on the Plan’s aspiration for a safe and sustainable network that continues to operate when nature throws its worst at us.

The Plan envisages a $5.5 billion investment in the region’s land transport network over the next decade*.

It prioritises investment to maintain existing infrastructure and services, followed by capital improvements that will:

These charts show the big picture, 10-year projections for:

“There have been uncertainties as we developed the Plan because of the COVID-19 pandemic and pending legislative changes, and Waka Kotahi has indicated the National Land Transport Fund may face constraints over the next three years. But, overall, we think Canterbury’s landed something feasible and affordable," Cr Scott says. 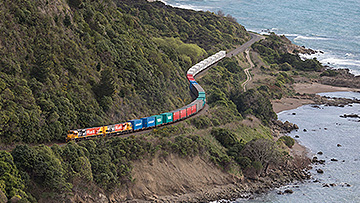 The Plan sets targets in support of its strategic objectives including:

“Canterbury embraces the Government's moves to reduce the road toll and transport emissions. Detail about how national targets will be achieved is still emerging but this Plan shows our willingness to measure tangible progress in our own region,” Cr Scott says.

“Although rail investment is outside our remit at a regional level, we are signalling that moving more freight by rail is an important lever in reducing our road maintenance costs, freight efficiency, and emissions. We will begin monitoring the level of rail investment in the region.

When the Plan is reviewed in three years’ time, the region will likely need to respond to changes in resource management, strategic planning and climate change legislation. “The challenges Canterbury’s network faces – safety, resilience, decarbonisation, demand, maintenance – are unlikely to change.”

Priorities for the next three years

Over the next three years, the Plan seeks to channel around 80% of expenditure towards road maintenance, improvements that are low-cost and low-risk, and completing committed projects.

The remaining 20% goes towards larger capital improvements which Councils and Waka Kotahi want to advance in the next three years, including:

Cr Scott says: “The Plan aims to rise to the challenge of maintaining an extensive, existing network, while making state highways safer and responding to rapid population growth in urban centres, where active transport modes and public transport reduce pressure on the network while bringing health benefits and emissions reductions.

“We don’t yet know the financial implications of the floods for transport infrastructure, but we do have the ability to make a variation to the Plan if Councils or Waka Kotahi need to make changes to their programmes because of damage."

*The Waitaki District is covered by the Otago Southland Regional Land Transport Plan.

How does the Plan become real projects on the ground?
Regional Land Transport Plans are key building blocks which promote local and regional priorities when Waka Kotahi prepares the National Land Transport Plan. As a result of this vital regional input, the NLTP ends up detailing all the land transport initiatives and activities – both regional and national – that Waka Kotahi anticipates funding during the next three years.

Find out more by visiting Local Government New Zealand’s Regional Transport Story.
Does the Plan cover recent flood damage to transport infrastructure, like roads and bridges?
The Regional Transport Committee approved the Plan on 27 May, two days before extreme rain caused flooding across Canterbury in May/June 2021.

If Councils or Waka Kotahi need to make a significant change their programmes because of the flooding, the Committee can make variations to the Plan. Emergency reinstatement variations do not require public consultation, so they can be swift.

However, the Plan places new emphasis on developing resilience to extreme events as a priority investment area for Canterbury because of numerous risks, including flooding, earthquakes and coastal erosion.
What public consultation has occurred?
The draft Regional Land Transport Plan was released for public consultation in February and a hearing was held in May. Submissions, analysis and further information about the Plan's development can be found via this link, but the key points are:
How is the final Plan different from the draft?
Changes include:

On the basis of submissions, the Regional Transport Committee has also asked Waka Kotahi to consider including the Woodend Bypass in its 10-year programme.

What is the Plan's highest priority?
The highest investment priority in Canterbury’s Regional Land Transport Plan is existing infrastructure and services, including the maintenance of local roads, improvements that are low-cost and low-risk, and the provision of public transport, as well as developing business cases for future projects.

Under the Plan, these activities would account for about $4 out of every $5 of projected expenditure, largely due to the size of Canterbury’s roading network, which covers 45,000 square kilometres, and which features 1,330km of State Highways and 14,636km of local roads.

You can find out more about these ‘business as usual’ activities on page 40 of the Plan.
What are regionally-significant projects?
The Plan ranks regionally-significant projects which meet certain criteria, i.e. they cost at least $2m and are being advanced in a Road Controlling Authority’s programme within the next three years. These 'big ticket' projects are assessed according to their contribution to the Plan’s strategic aims of safety, managing growth, mode shift and emissions reduction, and resilience.

You can find out more about these projects and their rankings on page 48 of the Plan.
Can other or new projects become part of the regional programme?
Yes. Transport planning is designed to be flexible - projects evolve, priorities change. The Plan will be reviewed in 2024 and variations can be made in the interim if necessary.
Where does Mass Rapid Transport for Greater Christchurch sit within the Plan?
The Mass Rapid Transit business case is being advanced by Waka Kotahi in collaboration with the Greater Christchurch Partnership (see page 42). This planning phase is a ‘business as usual’ activity given the highest priority in the Plan, which also signals that MRT-related projects may become part of the regional programme in future.
And the Woodend bypass in Waimakariri?
A bypass has not yet been included in Waka Kotahi’s 10-year programme but it has been flagged as a regionally-significant state highway project on the horizon (see page 52). On the basis of submissions, the Regional Transport Committee has asked Waka Kotahi to consider bringing the project forward.
And bridges in Ashburton, Hurunui and Timaru?
Ashburton District Council is advancing the business case for a bridge over the Ashburton River/Hakatere, linking the township and the suburb of Tinwald. Funding for the planning phase is in the highest-priority ‘business as usual’ category of local road improvements (see page 63). As a result of consultation, the second bridge is now specifically identified as a future regionally-significant project on the horizon.

The Plan also flags the region’s last remaining one-lane bridge on SH1 - the Hurunui Mouth Bridge - and the two-laning of the Upper Ōrari Bridge as future regionally-significant projects.
View all news