Reduced amounts of sediment and phosphorus are entering Hurunui and Kaikōura waterways while closer community connections are being created thanks to a four-year, $4.1 million Soil Conservation and Revegetation project (SCAR project).

Some 9000 poplar and willow poles have been planted on 76 hill country farms during the first three winters of the project which promotes soil stabilisation and improved soil management in areas subject to erosion and high winds.

About the SCAR project

Over four years the programme aims to deliver 20,000 poles, fence off, plant and retire 238 hectares of land for native reversion, deliver 82 land use capability maps to landowners, and share learnings on soil conservation at workshops in Hurunui and Kaikōura districts.

Our land management and biodiversity advisor Andrew Turnbull says having staff who can communicate effectively with the farming community as well as having good farm systems knowledge has been vital to the success of the project to date.

The project is funded by Environment Canterbury, the Ministry for Primary Industries and landowners.

Find out more about the project.

“We take the time to get to know the farmers individually and we have developed good relationships with them,” he said. “It is all about putting yourself in the farmer’s shoes and strengthening those connections, but still having the ability to have courageous conversations if needed.

“We’ve had farmers who are not keen in the beginning become our biggest supporters when they realise that we’re there to offer advice and to support them to protect and improve the hillside areas of their farms by providing them with the tools which help minimise soil erosion on hill country land.”

Simplifying application processes and having excellent support from the project co-ordinator has helped get more farmers involved.

“Farmers are busy and don’t want to be bogged down with paperwork, so we have made it really quick and simple for them to get involved in the project.” 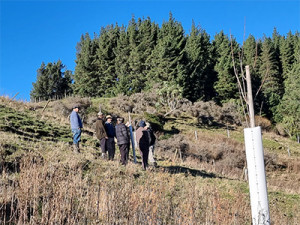 The poplars and willows are supplied by our nursery off Baynons Road in Clarkville near the Waimakariri River. Nursery manager Steve Tuer says the five-hectare site provides thousands of trees each year for the project and river control.

He understands that some people may question the use of poplars and willows because these have a reputation as pest plants, but modern species of poplar and willow clones have been developed for soil conservation purposes and lack the invasive characteristics of their predecessors.

“Some people are surprised that we are using poplars and willows, but they are the most suitable trees for erosion-prone, exposed hillsides as natives would never survive in those conditions due to their fragile nature and weaker root systems,” Andrew said. “Only poplars and willows can grow the extensive root system required to quickly stabilise hillsides.

The main variety used are Veronese and Fraser poplars, as they are best suited to the conditions. They can grow up to 20 or 30 metres high. We plant them at 10 to 15 metre spacings when they are three metres tall.

Reducing environmental waste is also an important feature of the nursery with leftover cuttings and poles turned into mulch which is added back into the soil.

Andrew says taking a catchment-based approach to the project and supporting and enhancing existing areas of biodiversity is important and he appreciates the sharing of knowledge that takes place during farm visits.

“Farmers are giving up their time to be involved in this project and by getting to know more about areas they have already developed, we can work together with them and their neighbours to create better holistic outcomes for everyone involved.

“The project also provides farmers with evidence for their Farm Environment Plans and builds resilience into their farming operation, along with reducing their overall carbon footprint and achieving good water quality outcomes.”

“We’re looking forward to continuing to develop these relationships while improving environmental outcomes during the second half of the project.”

Farmers in Hurunui and Kaikōura can now apply for funding for erosion control measures on their land.