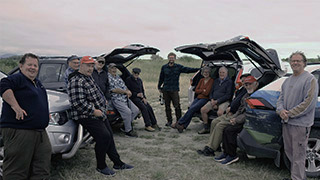 The Mens Shed built all the traps used in the Waiau Toa hāpua project, and are now working with ORCCG to construct traps for their Ocean Ridge trapping project.

“It was great to show them the different birds nesting and foraging in the area that the traps will help protect,“ Heath said.

“We saw a few nationally vulnerable banded dotterels (pohowera) and South Island pied oystercatchers (tōrea) without having to venture out too far, and black-billed gulls (tarāpuka) and white-fronted terns (tara) were spotted in the distance.

“Unfortunately, we did discover a dead oystercatcher chick, which looked to have been predated,” he said.

Survey shows nests, but no chicks 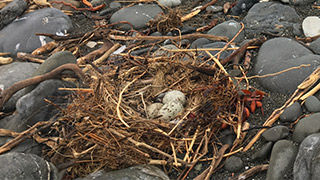 An earlier survey of shorebirds didn’t reveal any chicks or juveniles among a flock of 16 pohowera, though there were at least a couple of birds showing signs of a nest nearby.

Some nests of tarāpunga and tara were spotted during the survey.

“It was only about 35 nests, but there were still around 150 birds there, with some mating,” Heath said.

Huge seas washed away the first nesting attempt by the tarāpunga and tara colony this season, with around 150 nests lost to waves washing over the gravel spit during the five metre plus swell in mid-October. 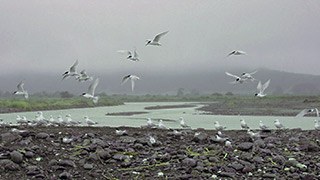 Black-billed gull and white-fronted terns are reaping the benefits of the Mens Shed trap building.

The traps are checked every two weeks, with between 10 and 20 predators picked up each check, making the tally 61 for the season. The tally can be followed at Waiau Toa/Clarence Rivermouth Trapping, on trap.nz.

“Undoubtedly reducing the threat of predators will help with breeding success for these ground nesting birds in the longer term.

“We also maintain open, weed-free islands near the river mouth that are above typical high river-flow levels to provide a safer alternative for nesting but the terns and gulls didn’t nest there this year,” Heath said.

Heath is working with both the Mens Shed and Ocean Ridge Catchment Conservation Group to perfect the different trap designs, with plans to trial some other designs to target feral cats, as well as ferrets, stoats, weasels, and rats.

How can we look after our special birds?

We all have a role to play in sharing the environment and protecting precious braided river birds. When out and about, please try to:

All images courtesy of Heath Melville.

A community-driven project in Kaikōura hopes to boost the number of native bird species in the area, by eliminating the…