It's been two years since Jodie and Matt Hoggard first began their riparian planting project around Swan Creek.

What once appeared to be a dried-up stream through their property, grazed to the hill and bare on both sides, is now a flourishing haven of native vegetation.

"It's been Matt's vision ever since we bought the block, Jodie said.  "He's a good visionary.  I couldn't really see it to be honest," she admits.

When they first bought the 4.2ha property almost five years ago it was basically a blank restoration canvas.  It was the ultimate family project.

"We wanted to give our kids space to grow up, grow some of our own food and have a good family project to get our teeth into.  It was a really attractive block with a bit of challenge," Jodie said.

The couple changed the line of the fence to provide a good width on either side of the stream and keep stock out completely.  They worked closely with Environment Canterbury biodiversity officer Jess Hill and nurseryman Dave Hockey to plan how to best protect the stream using native plants.

"To their credit, Environment Canterbury has some great resources around riparian planting so we made use of that material too," she said.

They applied to the Kaikoura Water Zone Committee's Immediate Steps Fund for $2700 to fund the purchase of 300 native plants to help get them started on the riparian planting around the stream.

"Thankfully the Immediate Steps funding was there.  It was probably something we would have done anyways but having that assistance meant we could get in and get on with it quicker than if we had just ticked along doing it on our own," Jodie said.

The result - a beautiful stream area where their children can explore and "fish".

Despite the North Canterbury earthquake and Cyclone Gita, the plants have continued to thrive.

"When Cyclone Gita happened, we had a massive amount of water coming through that creek; the carex would flop over with the current and then when the water subsided, they all just popped up again.  There is certainly a couple of areas where we've got flaxes too low, so we'll probably move those before they get too big.

"Every planting site is a bit of a learning curve for everybody.  You work it out along the way and see what works best," Jodie said. Swan Creek on Matt and Jodie Hoggard's property was bare when they arrived in 2015. 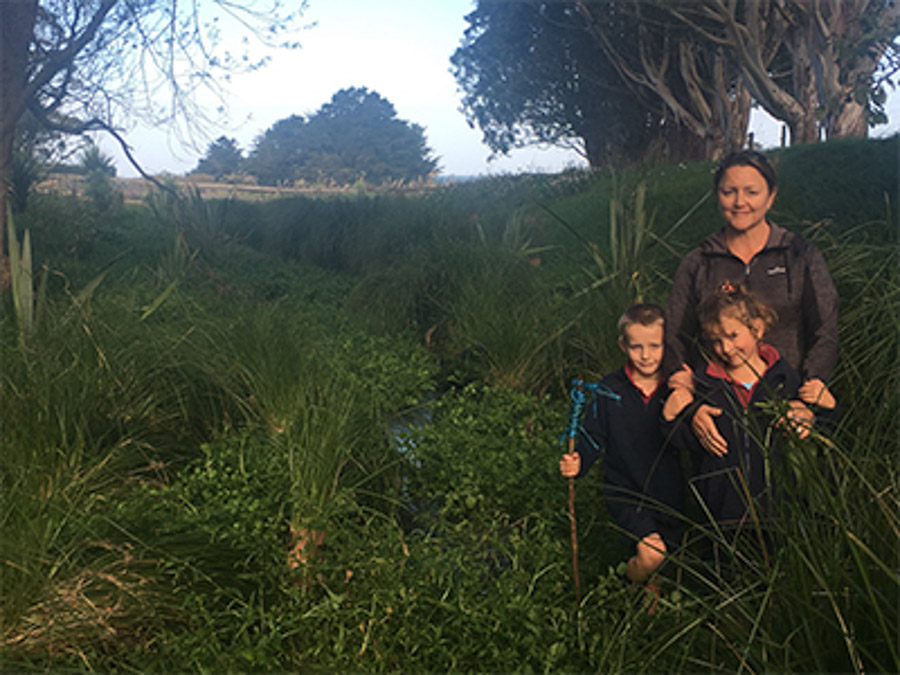 Wondering what you could do with your "wet" land?

With many new springs and wet areas popping up as a result of the North Canterbury earthquake making some areas of farmland now unusable, Jodie says now is the time to make use of the Kaikoura Water Zone Committee's Immediate Steps Fund.

"I think if people have given it a thought that it might be a good thing to do, then they should do it.  Certainly, there's the advice there, the assistance there, and there are tonnes of support to do it.  You're definitely not on your own"

After two or three years of general maintenance such as weeding, the plants should be able to manage themselves and require little thought.

"It doesn't have to be an onerous thing and you’ve got yourself a brilliant little nutrient filter, sediment trap, amazing aesthetics on the farm, good learning opportunity for local schools.  There are heaps of ways to look at it."

The Kaikoura Water Zone Committee has $100,000 a year to allocate to biodiversity projects in the zone.

"The forms are relatively straight forward and the process itself is pretty straight forward.  Getting Environment Canterbury staff to come visit was easy.  Process wise, I don't know if you could make it any different."

"We also recognise that environment issues are inter-dependant and we fully support the Government’s call to turn a… https://t.co/Dk4noWAhd6
Report an environmental incident with Snap Send Solve
A new project to trial the use of fertigation could be the answer to reducing nitrogen leaching on farms. Read more… https://t.co/w89XvrE1JP
Pūkaki dam spill demonstrates power - sweeps down riverbed
Whakaora Te Ahuriri Project, Ahuriri Lagoon - December 2019
Watch your speed and look out for others on the water
Make sure you and your crew have correctly-fitting lifejackets
Environment Canterbury © 2020
Retrieved: 3:48pm, Thu 20 Feb 2020
https://www.ecan.govt.nz/get-involved/news-and-events/zone-news/kaikoura/family-project-creates-environmental-haven/