Collaboration between landowners, community, and agencies is seeing continued protection and enhancement in the braided Waiau Toa Clarence.

Monitoring, weed control, ground-nesting-bird protection, and trapping are all contributing to the ongoing health and naturalness of the river, with a significant amount of resource and funding being allocated to the waterway over the last eight years.

Environment Canterbury, Department of Conservation (DOC), and Land Information New Zealand (LINZ) have been working together with Te Rūnanga o Kaikōura, the Clarence community, and Marlborough District Council to protect and enhance the catchment.

The Waiau Toa catchment has significant biodiversity, geomorphology, and recreational features, and it is particularly important to Ngāti Kurī, the tangata whenua, with mana whenua and mana moana in Kaikōura.

Weed and predator control aims to support the environment for special native plant species such as slender button daisy (pictured), found in the Waiau Toa catchment.

The awa/river is also one of the few wild braided rivers in Aotearoa, with limited development or human intervention across its 3,200km2 catchment.

It cuts through DOC managed reserves, high country farm stations, rolling landscapes, varied dryland ecosystems, and a multitude of freshwater environments before entering the sea near the Clarence settlement north of Kaikōura.

"It’s a popular destination with hikers, rafters, hunters, cyclists, off-roaders, and geologists. The catchment attracts many to linger in the splendour and awe of the geologically-diverse Seaward Kaikōura Ranges," our land management and biodiversity advisor Heath Melville said.

There are more than 125 species of flora and fauna present in the catchment that are classed as threatened or at risk, such as slender button daisy (Leptinella filliformis).

"Around 45 per cent of the wetlands in the Kaikōura zone are within the Waiau Toa catchment," Heath said.

Working towards a common goal

Multiple projects are underway in the catchment, all contributing to the protection and enhancement of braided river and biodiversity values.

Heath has been leading work in the lower catchment and says that having a common goal and taking a catchment approach increases the chance of success for the project.

"By taking a whole catchment approach we’re able to identify actions that provide the greatest benefit to the catchment, within the budget we have.

"It’s enabled us to see the big picture and balance strategic weed control with targeted predator control," he said.

The upper catchment is largely led by LINZ through Boffa Miskell biosecurity consultant Sian Reynolds. The mid-catchment area is highly dependent on station owners and DOC, whom Sian and Heath work with to help prioritise weed control in these areas. 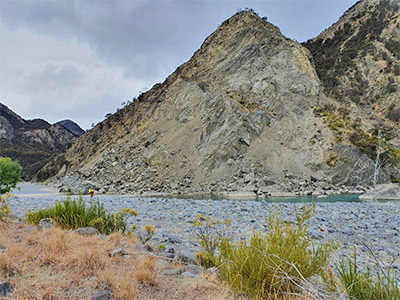 A key threat to the relatively unmodified nature of the Waiau Toa braided river system is weed invasion.

Woody weeds like gorse and broom can constrain the dynamic, ever-changing nature of the awa and threaten the natural environment by displacing native vegetation and increasing cover for mammalian predators such as cats and stoats.

"This, in turn, reduces the amount of native nesting habitat for braided river birds, such as the tarapirohe/black-fronted tern, which only nests in the open gravels nestled in our braided awa, predominantly in Canterbury," Heath said.

"The Waiau Toa is one of Canterbury’s braided river gems, and its ability to remain in such a wild native state is worth protecting."

Sian is also managing the Molesworth Wilding Pine eradication programme on behalf of Marlborough District Council, which sits separate to the work in the Waiau Toa. She says it has been a great way to get to know the upper catchment and contribute to the wider landscape-scale weed control approach within the Waiau Toa.

"It’s going to transform the landscape and, in turn, support all the other projects that are fighting the battle against weeds in the catchment," Sian said.

"Understanding the different landscapes and needs of each area of the river helps us create robust plans and, like Heath says, prioritise areas where we’ll get more bang for buck."

Since 2014, more than a million dollars has been contributed from the various agencies and landowners to undertake weed and predator monitoring and control.

A total of $250,000 from Environment Canterbury’s biodiversity funding over the last five-years, supported by the Kaikōura Water Zone Committee, and a further funding boost of $300,000 from LINZ last year has secured the continuation of effort across the catchment.

This financial year, a number of different funding sources are supporting the mahi in the Waiau Toa. This includes: 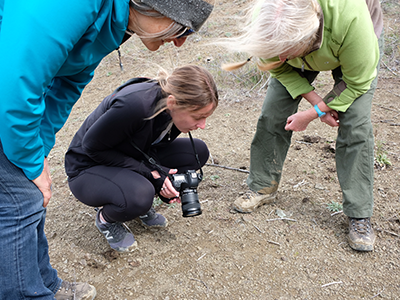 While the allocated funding will go a long way, the catchment unfortunately has a vast problem with weeds and predators, with many actions remaining unfunded.

"We’ll do the best we can with what we’ve got, but the reality is that weed and pest management will remain a necessity to protect the values present," Heath said.

"We’re consistently seeing more open riverbed and are committed to working towards eliminating high priority weeds from greater chunks of the catchment with what we are doing, while managing threats around key ground nesting bird habitat.

"There’s plenty of incentive for us to keep doing what we’re doing, but it’s important to note that there’s still areas of the catchment that will remain choked by weeds, where infestations are so dense it isn’t viable to control. But we’re hopeful biocontrol agents will eventually take effect meaningfully," he said. Individual landowners have contributed significantly, with hundreds of hectares of their own weed control work coordinated with agency weed control, saving on travel costs and incentivising weed control in the catchment.

"It’s been a joy getting to know this incredible catchment and its communities through this collaboration, for which I am hugely thankful to all those involved," Heath said.

More recently, a trapping and monitoring project at the hāpua has been established. This project is looking at nesting sites and breeding success of for tarāpuka/black-billed gull, tara/white-fronted tern, tōrea/oystercatchers, taranui/caspian tern, tūturiwhatu/banded dotterel, poaka/pied stilt, and other threatened wildlife that choose to nest there.

The traps have been constructed by Kaikōura Mens Shed and the mahi has led to an ongoing predator control project, targeting southern black-backed gulls, rats, hedgehogs, stoats, weasels, and ferrets.

It also supports the predator control initiative led by Te Rūnanga o Kaikōura (TRoK), who received funding from central government’s Jobs For Nature grant, to conduct predator control over 127km of coastline in the Ngāti Kurī takiwā from Awatere down to the Oaro. This project is named Te Tau Wairehu o Marokura Predator Control and is set to create 13 jobs over three years.

Environment Canterbury and DOC are partners with TRoK, supporting the project through staff assistance, monitoring, and training.

Next three years of mahi not slowing down

Over the next three years, project partners will work together to continue the weed and predator control and monitoring, investigate revegetation opportunities, continue supporting braided river bird habitat protection, and look into other ways the community can be involved – like signage at control sites, public education and awareness raising, and potential catchment group opportunities.

"We’re currently making arrangements with contractors to roll out the season of weed control, with further collaboration opportunities to follow. Meanwhile, we’ve still got contractors checking traps and monitoring, with chicks still present at the hāpua, while the tarapiroe/black-fronted tern colony has finished up after a relatively successful season," Heath said.

"Completing the raft-accessed weed control all the way through to Boundary Stream is locked in for early March, with some great feedback received from several people who rafted through the section we completed last season, commenting on the level of control that was visible."

"Given the response from the Clarence community, we’ll look to create more opportunities to collaborate further and get better outcomes through whanaungatanga," Heath said.

View a map of Waiau Toa catchment showing previous work, with planned work over the next 12 months and beyond.

All images provided by Heath Melville.