Results of a recent īnanga/whitebait spawning site study in the Kaikōura zone has helped build an understanding of how to protect and manage the future of the species. 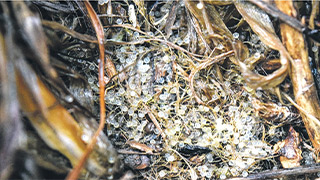 By protecting spawning sites the species will have a better chance of thriving in our local awa.

Conducted by the University of Canterbury (UC), the study focused on identifying the characteristics and conservation status of spawning sites for the nationally at risk-declining whitebait species.

Īnanga is the most abundant species that whitebaiters catch in New Zealand rivers, so is a key indicator of ecosystem health.

The study will support actions in the zone to protect and enhance the habitat for this important mahinga kai species to give them a better chance.

“We’re really fortunate that UC delved into our local awa to learn more about our cryptic īnanga following the earthquake’s uplift,” Heath Melville, our land management and biodiversity advisor said.

“The uplift has caused a loss of tidal influence on local hāpua and river mouths, which has likely narrowed the window of opportunity for īnanga to spawn successfully.

“By protecting spawning sites the species will have a better chance of thriving in our local awa, which will hopefully allow us, and future generations to be able to continue the tradition of whitebaiting,” he said. 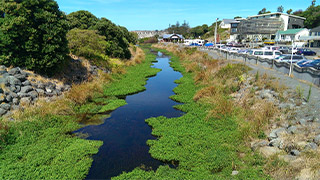 Study focused on non-tidal river mouths that are open to the sea.

The UC study looked at seven Kaikōura waterways – Blue Duck Creek in the north, Harnetts Creek, Swan Creek, Middle Creek and Lyell Creek / Waikōau in central Kaikōura, and the Kahutara and Oaro Rivers in the southern area of the zone.

It was the first of its kind to investigate īnanga spawning habitat in non-tidal river mouths that are open to the sea.

Spawning is the process of releasing the eggs and sperm by both sexes to reproduce, they use particular areas in the lower river for spawning. Identifying and protecting these areas can increase the number of eggs, juveniles, and eventually adult fish. 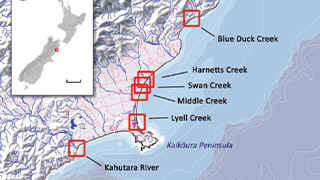 The study was undertaken between February and May 2019, it showed key patterns in spawning behaviour in these hapua systems:

Understanding these patterns provides key baseline data to inform actions that can protect and manage spawning sites in these river types which are relatively common on New Zealand’s east coast. 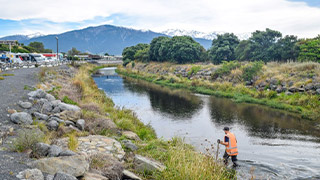 Survey of Lyell Creek where several spawning sites where found in down-town Kaikōura.

Environmental cues are key for spawning

“We learned a lot from this one rain event, and it allowed us to make additional measurements and learn more about the next one.

“There was another unexpected turn of events with a dry spell during March that left the February eggs high and dry with no chance of hatching.

“This led us to work with Environment Canterbury on an ecological engineering experiment to artificially raise water levels at Lyell Creek / Waikōau which was successful in triggering spawning.

“The results from throughout the project showed us just how attuned the fish are to changes in the water level.” he said.

The UC work further supports landowner, community group and governance initiatives in the catchments led by us and others and will assist future enhancement work to protect native biodiversity in these areas.

Knowledge of the spawning patterns of īnanga assists with planning projects such as flood management, river recreation improvements, and vegetation control.

If you want to know more about the research or are interested in getting involved, feel free to contact us.

Main image: Work is undertaken on an ecological engineering experiment to trigger spawning.

Whitebait season is underway, be across the new regulations and be aware of common mistakes.