Whakaora Te Waikēkēwai is a five-year restoration project aimed at restoring the lower-mid catchment of Te Waikēkēwai/Waikēkēwai Stream. It includes the construction of a new wetland on whānau land adjacent to Ngāti Moki Marae, and working with landowners to plant and fence the riparian margin along eight kilometres (on both sides) of the stream, as well as additional actions to improve water quality, mahinga kai and biodiversity values.

Over the past few years, restoration projects have been completed for Waikēkēwai stream within the marae grounds. It was important to the Taumutu whānau that these restoration efforts were completed because they wanted to make sure their own backyard was tidy before advocating to others about theirs. 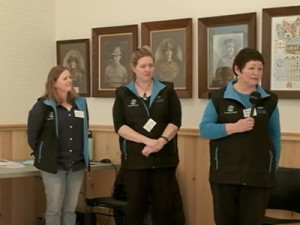 (L-R) Nicci Delahunty, Sophie McGregor, and Raewyn Solomon from Te Taumutu Rūnanga deliver a presentation on the Whakaora Te Waikēkēwai project at the landowner and community drop-in event on 25 May 2022.

The open day was held at the Lakeside Soldiers Memorial Hall in Leeston on 25 May, and showcased Whakaora Te Waikēkēwai along with four other projects underway in the area: Ellesmere Sustainable Agriculture Incorporated’s (ESAI) Tinaku Project; Muriwai o Whata/Coopers Lagoon; Pest Free Banks Peninsula; and, the Department of Conservation’s Weed Strikeforce.

Those attending the event included landowners/farmers who border on Te Waikēkēwai/Waikēkēwai Stream and Muriwai o Whata/Coopers Lagoon, as well as ESAI members and the wider community. Presentations from each of the project teams were given throughout the day.

Whakaora Te Waikēkēwai senior project manager Raewyn Solomon, Te Taumutu Rūnanga, said it was great to see so many landowners come along to learn more about projects that will benefit their farms.

“It was wonderful to have so many come along to enjoy a cuppa, some kai, and kōrero with the project teams. Working with landowners and whānau in the Te Waikēkēwai catchment is a critical part of our project and we are grateful that many took the time to come and learn more about the work we’re doing.

“These five projects together are creating something of a golden age for environmental work in the catchment.

“It was important to us to hold an open day to share information, ensure there are no surprises for landowners and farmers, offer opportunities to get involved and ask any questions they may have in an informal, friendly environment.”

Other groups involved agree that the event was a great success.

Gary Boyd, of the Department of Conservation’s Weed Strikeforce, said not only was it good to meet local landowners, but also to spend time with the other project teams and learn more about all the work happening so close together.

David Hewson, of ESAI’s Tinaku project said the open day was a great opportunity to share information about their project and to network and connect with other project teams and local landowners.

Raewyn Solomon said the Whakaora Te Waikēkēwai project team looks forward to continued collaboration with the community and the other project teams as work progresses.

“The open day was a great start to the next phase of work in Te Waikēkēwai, and we look forward to continued engagement and participation with everyone.”

Whakaora Te Waikēkēwai
Whakaora Te Waikēkēwai is a five-year restoration project aimed at restoring the lower-mid catchment of Te Waikēkēwai/Waikēkēwai Stream. It includes construction of a new wetland on whānau land adjacent to Ngāti Moki Marae, and working with landowners to plant and fence the riparian margin along 8km (on both sides) of the stream, as well as additional actions to improve water quality, mahinga kai and biodiversity values. In order to achieve the project’s objectives, the team needs to work with landowners to restore the part of the stream that flows past their property and will do this by fostering an open, honest and productive relationship.
Muriwai o Whata/Coopers Lagoon
Private farmland borders Muriwai along much of its boundary, which is used for a mix of grazing and cropping. Te Taumutu and Te Rūnanga o Ngāi Tahu wish to develop productive working relationships with landowners in implementing Te Mahere Whakahaere o Muriwai o Whata – the Muriwai o Whata Management Plan. Muriwai is used and enjoyed by the wider community for a range of recreational activities. Te Taumutu and Te Rūnanga o Ngāi Tahu intend to foster community involvement in implementing the Muriwai o Whata Management Plan, including assisting with restoration efforts and enhancement of recreational opportunities.
Pest Free Banks Peninsula (PFBP)
Pest Free Banks Peninsula/Te Pātaka o Rākaihautū is a collaborative programme to protect and enhance biodiversity on the Peninsula through the widespread eradication of animal pests. This community-led initiative was formalised through a Memorandum of Understanding signed by 14 foundation signatories in November 2018. It aims to make Banks Peninsula/Te Pātaka o Rākaihautū free of pest animals so the indigenous biodiversity can thrive and become more widespread across the Peninsula and in Christchurch City. To achieve this and prevent pest reinfestation, PFBP is looking to undertake pest control in the Ellesmere area to create a pest-free buffer zone around Taumutu and along Kaitorete. PFBP supports Ngāi Tahu values, community development, and sustainable agriculture and tourism.
Weed Strike Force
The Department of Conservation’s Weed Strikeforce is a full-time team dedicated to the control of willow and other weed species around the shores of Te Waihora/Lake Ellesmere. They control a range of pest plants including grey willow, yellow flag iris, reed canary grass, blackberry, elderberry, and gorse. They work on both public and private land.
Ellesmere Sustainable Agriculture Inc

ESAI is a farmer-led catchment group, with over 100 members in the Ellesmere area of the Selwyn district. Farming practices in the district include arable, dairy, beef and lamb, mixed cropping, and commercial vegetable growing. Many are intergenerational family farms with a strong sense of kaitiakitanga and connection to the land.

The Ministry for Primary Industries approved $2.2 million over three years to implement an exciting restoration project for the Ellesmere area between the Selwyn and Rakaia rivers, from State Highway 1 to Te Waihora and the sea. This funding gave life to the Tinaku Project. Work carried out by the Tinaku Project aims to help landowners implement real and significant changes on the ground and is similar to the work accomplished by the Harts Creek Streamcare Group. The Tinaku Project assists landowners with environmental enhancement, including riparian fencing, native plantings, willow control, mahinga kai, wetland and biodiversity restoration projects, and sediment control measures.