A long-term project designed to improve biodiversity and restore native vegetation at Boat Creek Reserve, located in the Rakaia Huts community, has received $15,200 of funding from Environment Canterbury for weed control.

The funding has been allocated through the Selwyn Waihora Zone Committee’s Action Plan budget for 2021/22. It will be used to remove willows, silver poplars, and ivy from the edge of Boat Creek.

This will allow an understory (lower layer of vegetation) of native trees and shrubs to be re-established along the banks of the creek. Native seedlings will be planted in the area once the woody weeds are removed, which will also provide an opportunity for native seed sources to naturally regenerate in the future. Project coordinator Hamish Jones said the restoration project, which began three years ago, has received dedicated support from the Rakaia Huts community, with locals volunteering thousands of hours of their time to create a sanctuary for native species to thrive in the peaceful recreation area.

The reserve was used as a camping ground until the 1990s when ongoing flooding prompted its relocation to an adjacent site on higher ground. Over the last 20 to 30 years the reserve had become overgrown and unkempt until the local community decided to restore the area.

“When we started the project, the grass was six feet high in places and the area along the creek edge was infested with blackberry, old man’s beard, willows, and silver poplars. It was so dense that you couldn’t even see the creek,” said Hamish.

To make the restoration work more manageable, Hamish and his team of volunteers have divided the project into two stages. They are currently working on stage one which encompasses two hectares and includes Boat Creek. Stage two is 16 hectares and will be a long-term project carried out over the next decade as funding and volunteer hours permit.

Planting for the conditions

Six thousand native seedlings have been planted in the old campsite area with the remaining 2000 to be planted in the coming months. Hamish said the group has worked hard to identify which native plants can survive in wet conditions as the reserve area can flood several times a year.

Hamish said the flooding usually subsides within a few hours, but some ponding may persist during the cooler months.

“We have identified wet forest native plants which can survive underwater for several weeks and moist forest plants that can manage 48 hours of submersion during a flooding event. It is important to do your research otherwise you can easily lose all your plants.” 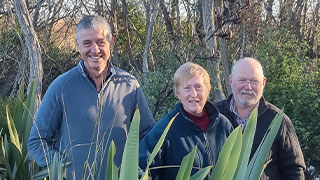 Boat Creek restoration group members Hamish Jones, Diane Clarke, and Andrew Clarke in front of an area where woody weeds will be removed over the next year

One of the key learnings from the project so far has been investing in maintenance and weed management. Hamish said this, along with the issue of volunteer burnout, are vital considerations for all environmental groups when creating a vision for a restoration project – especially one such as Boat Creek, which will span a decade or more.

“What we have found is that the maintenance aspect is just as important as the planting itself. You need to pace yourself and avoid placing too much responsibility on any one of the volunteers.

“We have 11 residents in our working group, and we try to share the work as much as possible. We also have a wider group of 50 people who have given time and support to the project.

“What keeps us going is looking back at how far we have come and seeing natural native regeneration throughout the site. We are keen for other groups considering similar projects to visit us and see what we are doing so we can learn from each other.” 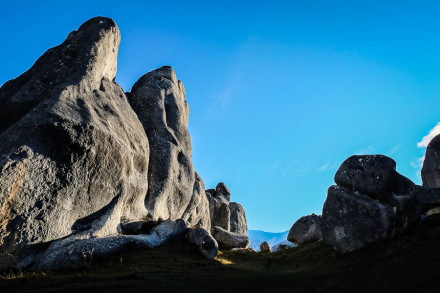