Driving State Highway 73 through Arthur’s Pass this spring you may come across the of thousands of dead and dying trees. But it’s all part of a multi-agency effort to stop the spread of wilding conifers and return the land to a more natural state.

Years of joint efforts funded by the Department of Conservation, Environment Canterbury and Waimakariri Ecological Land Restoration Alliance were working to slow the encroachment of these pest species across much of inland Canterbury, but a major funding boost from the Ministry of Primary Industries (MPI) in 2016 has helped turn the tide from control to eradication.

The Craigieburn Management Unit was one of the major recipients of a government plan to control wilding conifers back in 2016, receiving $1.8 million of the $16 million dollars allocated by MPI for the national programme. The money has been put to good use, with major land and air operations undertaken to remove the trees.

Operations are taking place all the way through the spine of the South Island, from Molesworth Station to the Lindis Pass, with wilding control efforts starting at the main divide and working east with the prevailing wind, removing seed sources wherever possible.

More recent efforts have moved into farmland close to Craigieburn Forest Park and Arthur’s Pass National Park, where many tourists pass using State Highway 73 and the Tranz Alpine. While dead and dying trees may look like destruction, it’s a benefit to biodiversity in the zone, and a priority for the Selwyn Waihora Water Zone Committee.

And while the upfront cost is substantial, it’s much more cost-effective than constant control efforts.

Environment Canterbury Biosecurity Advisor for Special Projects Steven Palmer says that without government assistance, the wilding conifer problem would have gotten out of control. Instead, he says, teams are now almost three-quarters of the way through their initial cut, and making steady progress in removing the pest pines. 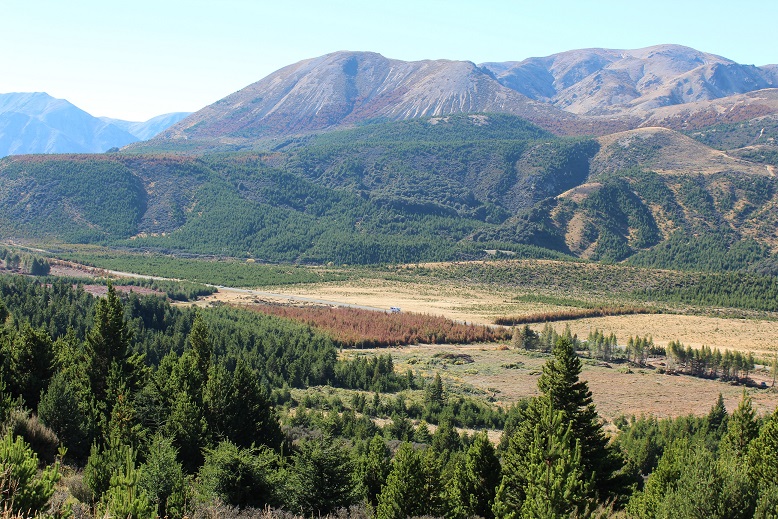 Covered with pest conifers in 2012. What are wilding conifers, and why are they a problem?

The MPI has identified six conifer species that are considered pests. Initially prized for their ability to grow quickly in difficult terrain, these hardy species have often been used to plant shelter belts in the high country. But the same properties that make them great for shelter, make them a pest elsewhere. With seed dispersal driven by the strong prevailing nor’westers, the trees have quickly colonized large parts of Canterbury’s highland.

They are considered a pest because they grow densely, shading out native species, without providing a food source prized by native fauna, causing a loss of habitat for native plants and animals and reducing biodiversity. The trees are also very thirsty, sucking up great quantities of water that feeds Canterbury’s wetlands and riparian areas.

And their spread threatens both farms and protected native land. In the Selwyn Waihora region, the Korowai-Torlesse Tussocklands Park was particularly threatened, while some farms had been seriously affected, with areas not under intensive grazing overrun by wilding conifers. But it’s an expensive exercise. Fortunately, another $1.25 million in MPI funding has been allocated for the Craigieburn Management Unit this season.

Steven Palmer says that funding will go to ensure hard fought gains become permanent, with workers making further progress in eradicating mature trees and returning to previously covered areas to take out seedlings before they begin to produce cones.

“We could have to go over these areas another three times over nine years,” he says. “That should exhaust both the seed source and the seed bank in the ground.” Find out more about plant pests we manage in Canterbury.