A 42-hectare remnant of the native forest that once covered Banks Peninsula has been protected and will continue to support native flora and fauna thanks to a farmer-led conservation effort.

Landowners Brent and Anna Fisher are preserving the native bush on their property, with support from the Banks Peninsula Conservation Trust, and funding from the World Wildlife Fund, Environment Canterbury and Christchurch City Council.

Only around one percent of the original forest area of Banks Peninsula remains, supporting a wealth of plant and animal biodiversity.

The Fishers own Silverstream Charolais and Hereford cattle studs and bought the land at Ataahua, near the eastern end of Lake Ellesmere/Te Waihora, seven years ago to expand their farming operation.

“We were always aware of the bush and it’s beautiful,” says Brent. “The previous owner had an ecological survey done by botanist Hugh Wilson and there’s a tōtara in there that apparently could be the biggest tōtara tree on Banks Peninsula.”

Working with the trust to protect biodiversity When the Fishers bought the land, the bush block, tucked in the hills between Kaituna and McQueens valleys, was unfenced and stock could wander in, damage vegetation, disturb the waterway and sometimes be a challenge to muster.

They approached the Banks Peninsula Conservation Trust for help in fencing the important remnant off and a conservation covenant in perpetuity has been placed over the land, now known as Sally’s Bay, so it will be preserved and protected for all time.

“Initially we thought it might be about 25 hectares, but it ended up being 42 hectares. It was a lot bigger than we anticipated but once we got in there looking to see where you could fence and what was most practical, what we would gain from a farming point of view by grabbing some more, wasn’t very much at all so we went with it,” Brent says.

“We always wanted to do it but the two biggest constraints on farmers are time and money and to have someone come in and organise it, that was the beauty of it,” says Anna.

“The emerging natives will out-compete the gorse in time and form a new forest canopy, killing the gorse in the process,” Marie says.

“The rate of native species regrowth in this favorable south-facing gully has been rapid and will be even faster now that stock has been excluded. Protecting the spring-fed waterway which runs through it will, in turn, reduce sediment reaching Lake Ellesmere/Te Waihora below it.” 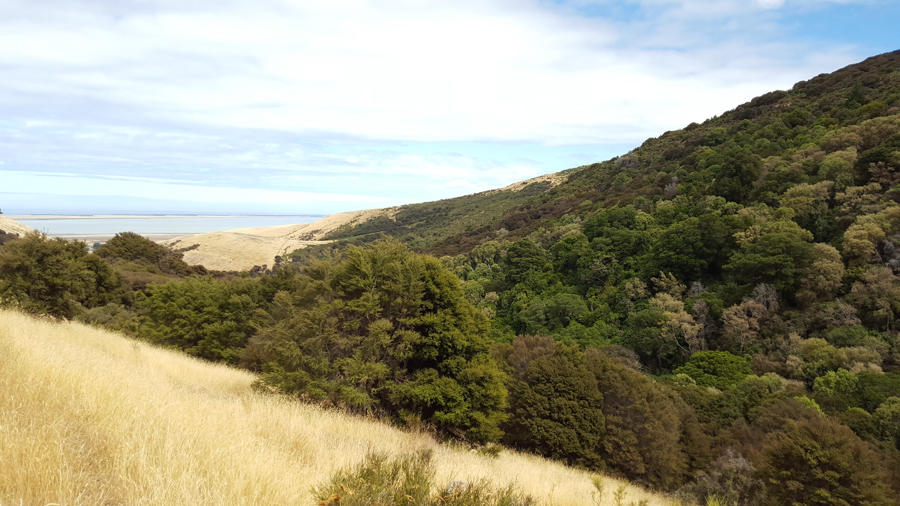 Protecting the forest for the future

“This covenant is an important biodiversity oasis and stepping stone in a vast surrounding pastoral landscape which will help to accommodate the increasing abundance and spread of native flora and fauna from other areas,” says Marie.

“It will provide food and shelter to encourage birds, invertebrates and lizards who will, in turn, facilitate the spread of valuable seeds to further areas.”

The Sally’s Bay block gives a clue to what Banks Peninsula was like before early settlers cleared the land.

“There are some beautiful species in there and it’s always nice just wandering amongst it – it’s like a different world under that canopy,” says Anna, who adds that she and Brent are now fencing off and planting other waterways on the farm at their own expense.

“We’re trying to protect the water that goes off this farm and into the lake.”

Find out more about the work of the Banks Peninsula Conservation Trust. Selwyn Waihora biodiversity gets a boost