Home / News & events / From Cameroon to Mongolia... to Twizel?

From Cameroon to Mongolia... to Twizel?

His new role as a senior resource management advisor will see him use skills in communication and relationship building with farmers and key organisations in the Mackenzie Basin to continue working towards best farming practice and good environmental outcomes.

Cameroon is a country of extremes – some of the wettest tropical rainforest in the world at its southern tip – and scorching Sub-Saharan conditions in the north.

It is home to more than 20 million people, has more than 250 native languages; and for Dan, it was a place of work.

Dan, 48, served as a medic in the Royal New Zealand Army before finding himself in the jungles of Cameroon, working for an Australian mineral exploration company, a job he described as "bloody hard". Dan's hard yakka in the jungle

“We worked in the jungle for those 12 weeks on, then had four off," he said.

"During our off weeks, the deal was that you could be flown back to Perth and hitch a ride to New Zealand from there, or you could choose any other place in the world that was of a comparable ticket price.

"So I’d often choose to fly out to places like Buenos Aires or Kenya for a few weeks at a time," he said.

A different scene and climate

From the searing heat of Cameroon, Dan’s next job saw him working through winter in Northern Mongolia, where the country meets Russia – on one occasion waking up to -52 degrees Celsius.

The difference (in Africa) was I eventually learned a bit of jungle French; whereas in Mongolia I had no chance of talking to anyone. I actually had to have an interpreter who came with me everywhere, all the time,” Dan said.

Eventually, family was what brought Dan back to Canterbury.

"My father passed away while I was overseas and trying to get home for the funeral was so hard from where I was.

"Life is just easier here. You want a bottle of milk; you just go and get it. In developing countries, it’s not that easy,” he said. 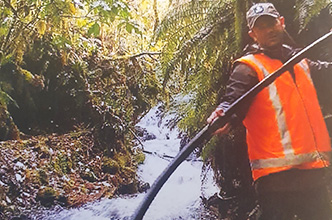 In his time abroad, Dan learnt fast – he had to. Communicating effectively and building trust with those around him meant he was prepared if something went wrong – often the difference between getting a job done safely and a hospital visit, or worse.

Now he’s taken some of those lessons into his new role working with consent holders in the Mackenzie Basin.

“(I’m) a link between consent holders, our scientists and our technical leads. I’m also the person on the ground who’s not afraid to sometimes have tough conversations with those people,” he said.

His role is newly-created in the area – helping maintain the uniqueness of the district and to deliver the goals of the Mackenzie Basin Agency Alignment Programme.

Environment Canterbury is one of five government agencies with statutory responsibilities in the Basin. The others are Mackenzie and Waitaki district councils, the Department of Conservation, and Land Information New Zealand.

Having Dan on-the-ground in Twizel will also help Environment Canterbury’s response to local compliance issues and monitoring in this remote part of Canterbury, which has extremely high biodiversity values in terms of wildlife and landscape.

If you see Dan out and about, be sure to ask him about his globe-trotting tales. And if you have any questions or concerns about farming, or any consents you have or need, contact him by email: Dan.Turner@ecan.govt.nz or phone on 027 381 1409.

Here are some other recent projects, showing our resource management officers in action:

(Lead photo: Dan in the jungle in Congo.)