Invasive crack willow trees that can harm the natural ecosystem are set to be removed at Lake Middleton later in the year thanks to support from the Upper Waitaki Water Zone Committee.

The project, run by the Ōhau Conservation Trust, received $11,000 to boost the natural biodiversity of the little lake, which sits beside the much larger Lake Ōhau. 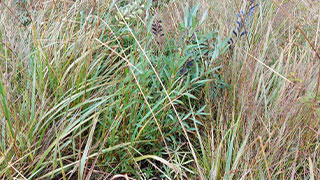 Small willow regrowth found all around the lake

The lake has well-established crack willows growing on its eastern and south-eastern margins. The project aims to stop crack willow seedlings from these established crack willows spreading around the entire lake by controlling them along 1.25km of the lake’s perimeter. The trust worked with the Department of Conservation who administer the reserve to set up the project. A contractor will undertake the control work.

Trust chair Viv Smith-Campbell said the project will help protect the indigenous species which call the lake and its surrounds home.

“We know there are species based in the area, of at least 26 plants (aquatic and terrestrial), 14 invertebrates (aquatic), lizards, four fish, 27 birds, 66 algae/phytoplankton, and four zooplankton,” she said.

Viv said it is a special place with a rich biodiversity.

“Of these species, two fish, nine birds, one aquatic invertebrate and two plants have a conservation status threat ranking of Threatened or At Risk,” she added.

Viv said the trust will monitor for regrowth and any new spread following the control operation.

“If the funding is not all used on willow control, it is proposed the contractor use the chemicals on other plant pest species, such as broom, that is also found around the lake margins,” she said.

The Ōhau Conservation Trust was formed in 2004 and aims to promote awareness of the area’s unique biodiversity, and undertakes projects to protect it.

As well as enhancing biodiversity, the willow control project also aligns with the zone committee’s plan to enhance mahinga kai opportunities. Mahinga kai is about the value of natural resources that sustain life, including the life of people.

Committee chair Simon Cameron said it is important to manage and protect these resources, in the same way that those that have gone before us have done.

“By removing willows from around the lake, the natural environment will be enhanced and the natural resources will be more likely to be able to flourish,” he said.

“It also fits with our plan for the preservation of recreational values of Waitaki Lakes,” Simon added.

The project is set to start at the end of the year, finishing up in February 2023.

The Ahuriri catchment in Twizel is benefitting from passionate local farmers and their will to improve water quality.