A joint project, which includes $10,000 of Immediate Steps biodiversity funding allocated by the Upper Waitaki Water Zone, is now underway to manage the invasive rowan tree before it becomes more established.

The rowan tree was once widely planted for protection against witches and spirits in Britain and Ireland – its red berries believed to ward off evil – but in our part of the world it has now become a threat.

Rowan, which is part of the wider rose family, has been taking hold amongst tussock in the Upper Waitaki and, if left unmanaged, it can smother and kill native plants.

Mature trees can grow to 15 metres in height and can live for up to 200 years.

Working together to control rowan

Land Information NZ is managing the project and is working in partnership with DOC, Te Manahuna Aoraki, landowners from Ferintosh station and Environment Canterbury.

“Rowan was originally planted by the Ministry of Works as an amenity tree as part of the hydro development. It produces an abundance of attractive white flowers in the spring.

“However, it has become problematic as it produces large numbers of berries that are palatable to birds who then disburse the seed across the landscape threatening to overrun native plants.”

The control work has involved ground crews systematically searching and destroying the invasive tree species, particularly where tussock land has been retired from grazing. This took place recently in March and May 2020.

“Our efforts have seen significant progress in reducing the number of rowan across Ferintosh Station and adjacent land,” said Dave Mole. “We will reassess in late spring and determine if further control is required."

Upper Waitaki Water Zone Committee Chair, Simon Cameron, said the committee was pleased to support the project because it aligns strongly with its key outcomes.

“We are always keen to support control initiatives for high risk species within our indigenous dryland ecosystems.  This is a great collaborative project that should really make a different to protecting our native species from this fast-growing introduced tree.”

In the northern hemisphere, rowan was once widely planted as a symbol of protection, as the bright red of its berries was considered to be the best colour for fighting evil. In Ireland, it was planted near houses to protect them against spirits, and in Wales rowan trees were planted in churchyards.

More about the water zone committee

The water zone committee is made up of community members, rūnanga representatives and councillors from Waitaki, Mackenzie and Waimate District Councils, as well as Environment Canterbury.

The committee's role is to work with the community to develop actions and tactics to deliver on the Canterbury Water Management Strategy. 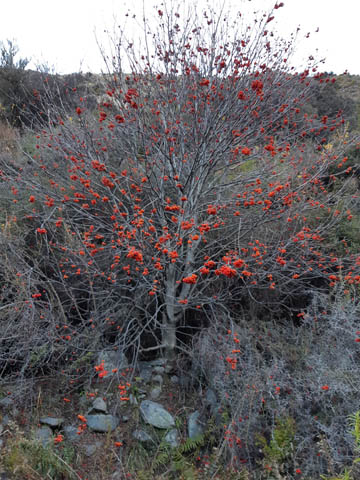 If you have a biodiversity project that would benefit from IMS funding, check the application list to see if you're eligible.