Trapped eels get a helping hand

Wrestling eels and chasing whitebait - all in a day’s work for Environment Canterbury’s Makarini Rupene.

Makarini is our northern Pou Mātai Kō (cultural land management advisor), and he recently led the relocation of up to 20 tuna/eel and whitebait that were trapped in a subdivision retention basin following heavy rain. Capturing the trapped tuna/eels for relocation

The relocation took place after the discovery of several dead tuna – both longfin and shortfin – after the weather event caused creeks to spill out, trapping the fish in the basin outside a new housing development in Kaiapoi.

The taonga species, some up to 40-years-old, were then transported to the main branch of the Kaiapoi River.

Without intervention from Makarini and a team of Environment Canterbury volunteers, the ka ika/fish had no way of getting back to flowing water. Once the retention pond dried up, they would have died.

They then transferred what they caught into buckets, carrying them to the edge of the river, which you can check out in the video below.

There, the tuna and whitebait were set free. It was slippery work at times – with some of the eels jumping out of the net or bucket, requiring a bit of wrestling to get them back in!

Mō tātou, ā, mō kā uri ā muri ake nei – for us and our children after us 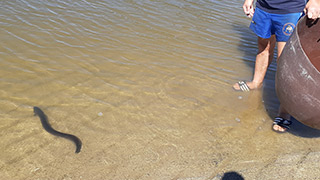 Releasing the tuna/eels into the Kaiapoi River

The ka ika are taonga species for local iwi, Ngai Tahu – and the local hapū, Ngai Tūāhuriri – and are essential to the continuation of mahinga kai for iwi and the wider community.

Four of the six whitebait species in Aotearoa New Zealand are classified as either ‘threatened’ or ‘at risk’. The longfin eel is also ‘at risk’.

Moving them back to their proper habitat was a no-brainer for Makarini and his team. He said they wouldn’t have stood a chance if they were left in the retention basin.

“It was important for us to step in and relocate them. It was because of human activity that they ended up there, so we have a responsibility to help them out.

“Saving these taonga means we continue to support and protect them, sustaining mahinga kai and biodiversity values into the future for our children, and their children too,” he said.

Land development and land use change on old swamps, streams or wetlands, can be problematic for aquatic life.

“The waterways can end up being diverted or pushed back under springhead streams, disrupting the flow and connectivity of the species,” Makarini said.

“It’s crucial that developers understand what’s underground - which springs are about and which waterways have been there.

“That can include putting up fish screens or changing the way the land is developed – perhaps including constructed wetlands.”

He warns that until preventive action is taken at sites such as in Kaiapoi – the problem may keep happening.

Developers wanting advice or assistance to ensure mahinga kai and biodiversity values are protected and enhanced during works can contact their region’s Pou Mātai Kō.  Call us on 0800 324 636 to be put in touch.

Mahinga kai is about the value of our natural resources – including our bird, plant and animal life.

Everyone has a part to play in protecting and enhancing mahinga kai values, to ensure our ecosystem and food sources are protected for years to come.

Learn how you can do your bit for Aotearoa’s treasures, and the habitats that support them.

Identifying the characteristics and conservation status of spawning sites for nationally at risk-declining īnanga/whitebait.

Makarini Rupene, about moving his focus towards Waimakariri to raise awareness on how to use the land and environment to…