The Christchurch West Melton zone extends from the northern parts of the Port Hills to the southern bank of the Waimakariri River. It also extends inland to include Halswell, Templeton and Halkett. The zone contains unique ecosystems and represents a real opportunity for enhancing biodiversity within an urban environment. The Waimakariri River once flowed through Christchurch, forming an area that is rich in deep alluvial soils with interspersed peaty soils and coastal sands. These diverse soil types once supported a variety of ecosystems including impressive podocarp forests, and abundant freshwater springs which formed the various low gradient streams and extensive wetland networks.

Impressive podocarp forest once covered the bulk of the plains, following extensive deforestation for farming and industrial development, Deans/Riccarton Bush is one of the only significant examples of a remnant kahikatea-ribbonwood forest.

The abundant freshwater springs throughout the zone support a network of low gradient streams and rivers including the Avon/Ōtākaro, Heathcote/Ōpāwaho, Styx/Pūrākaunui and Ōtūkaikino and catchments. The Ōtūkaikino catchment supports a wide range of introduced and native aquatic life and has great restoration potential.

The Cashmere Stream (which feeds the Heathcote River/Ōpāwaho) has also been identified as a high value ecological system and is one of few still suitable for supporting sensitive and rare species such as koura, kakahi and blue-gill bullies.

A number of peaty wetlands occur in historic back swamp areas including Travis Wetland and the Sanctuary wetlands, which is the largest wetland area on the lower Waimakariri River. The wetlands contain some fascinating cryptic species including the marsh crake and Australasian bittern. Productive estuarine and lagoon habitats are home to a diverse array of waders and migratory birds. The Avon-Heathcote Estuary/Ihutai and Brooklands lagoon are the two largest examples of these habitats within the zone.

Ōtūkaikino wetland is a 13 ha reserve on the outskirts of Christchurch which is being restored as a living memorial. The freshwater wetland is home to pukeko, shoveler (kuruwhengu), grey teal (tete), marsh crake (koitareke) and even bittern (mataku) have been spotted here. 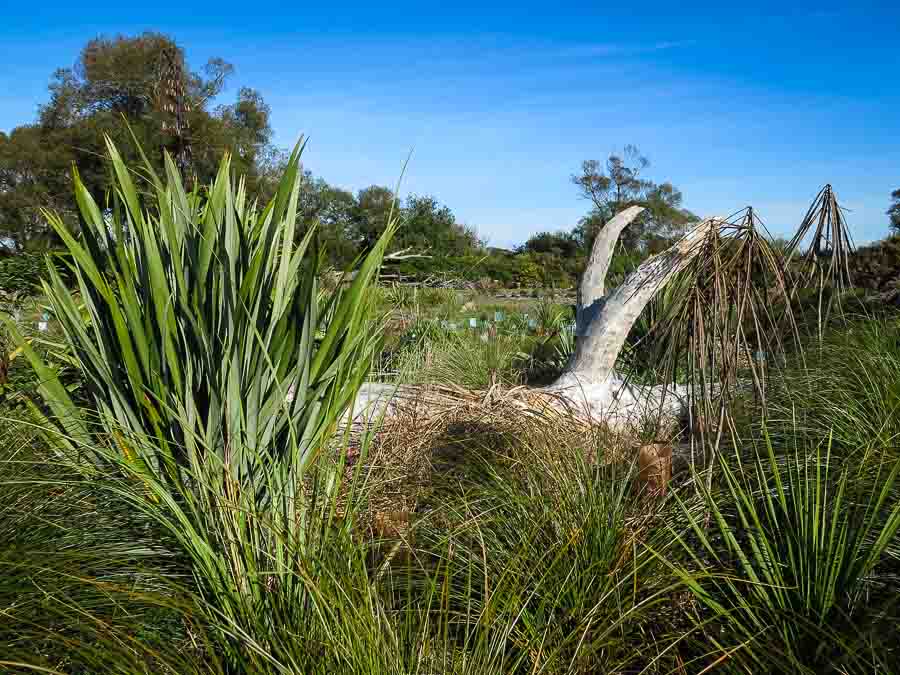 A boardwalk track around the wetland takes approximately 30 minutes and there are places to sit and enjoy the views along the way, please see the Ōtūkaikino Wetland map (PDF 358 KB). The track goes across ponds and there is a nearby stream, so young children must be supervised. Please see the DOC website for more information. The boardwalk tracks may be submerged at times due to changing water levels post earthquake which will mean that the track is temporarily restricted to one-way.

Please note that Ōtūkaikino wetland is a 'Wāhi Tapu' site and so food must not be carried or eaten over the entrance bridge but picnicking is allowed in an open, grassed area alongside and there is also a toilet available near the carpark.

Ōtūkaikino wetland reserve is a Tūāhuriri runanga wāhi tapu site. The wetland was once used for burial preparation; the water, vegetation and mud were used by tohunga (priests) for embalming purposes.

In 1850 the site was purchased and farmed by Edward Wilson and Joseph Chaney and then in 1962 it was taken by the Ministry of Works and Development for development of the Christchurch Northern Motorway.

Since 1992 the area has been gradually restored and is managed as a “Living Memorial” through a partnership between the Department of Conservation and Lamb and Hayward Ltd. (funeral directors), supported by Te Ngāi Tūāhuriri Rūnanga. A native tree is planted to commemorate the passing of a loved one. It is summed up in its Māori title — Mau Mahara — remembering you. There are no burials within this reserve, and specific trees are not dedicated to any one person.

A Living Legends project marking the Rugby World Cup saw 11,000 native plants planted from 2011–13 and the wetland received a further boost in 2014 when the Christchurch-West Melton Zone committee awarded Immediate Steps funding to remove willows and beggars' tick which were threatening the site. The zone committee also funded the fencing of waterways on neighbouring properties that feed the wetland.

Ōtūkaikino wetland is on the outskirts of Christchurch City, by the northern suburb of Belfast. The entrance is off Main North Road, between Chaneys Corner and the Belfast end of the Northern Motorway.

Sanctuary Wetland is a 52 hectare reserve on the lower bank of the Waimakariri River. The wetland is a spring-fed swamp where remnant patches of the original vegetation still exist under the exotic canopy of mainly willows and poplars. 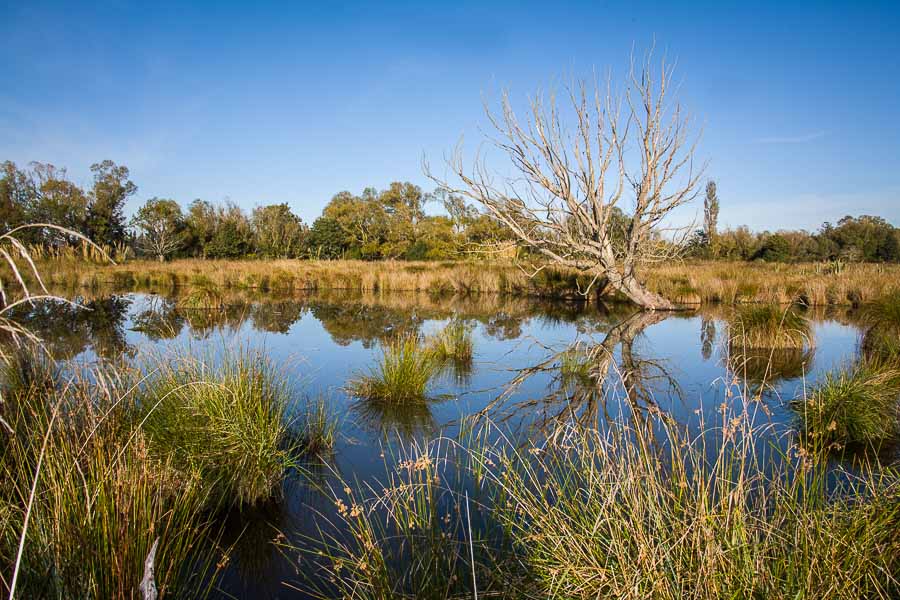 Things to do
The track through the Sanctuary Wetland takes around 1.5–2.5 hours on foot and is also accessible for bicycles, please refer to the Sanctuary Wetland map (PDF 352 kB). There is room for picnicking in the Rock Spur parking area. The riverbed adjacent to the track is also an important river bird breeding area where black billed gulls are known to nest, making this a good spot for bird-watchers!
The Sanctuary Wetland is part of the Templars Island section of the Waimakariri River Regional Park.
Description
Sanctuary Wetland is a 52 hectare reserve on the lower bank of the Waimakariri River. The wetland has been described as one of the best remaining examples of formerly widespread freshwater swamp habitat. Black billed gulls and black fronted terns form nesting colonies on the adjacent riverbed. The swamp and streams are home to pukeko, grey duck and NZ shoveller/kuruwhengu. Other native birds in the area include harrier, kingfisher/kotare, grey warbler, fantail, bellbird/tītapu and silver eye.

Weed control work began in 2008 with the aim of restoring this area and in recent years a variety of native plants have been planted to supplement the natural regeneration that is occurring under the canopy. The restoration of this site is still very much in the early phases but received a significant boost in 2013 with the Christchurch-West Melton Canterbury Water Management zone committee supporting the site with $30,000 of Immediate Steps funding for weed control and the planting of almost 9,000 natives.

Sanctuary Wetland is accessed via Coutts Island Road. Turn off onto Lorimas Road and turn left to follow the stopbank to Rock Spur carpark area. Follow the walking/biking track upstream. Alternatively, for a shorter walk, drive down Coutts Island Road until you reach the locked gate where there is room on the side of the road to park. From here, walk up onto the stopbank.

The reserve is a significant and impressive saltmarsh wetland at the mouth of the Waimakariri River and forms an integral part of the nationally significant Brooklands Lagoon wildlife habitat, supporting populations of threatened swamp birds and waders such as marsh crake and Australasian bittern. 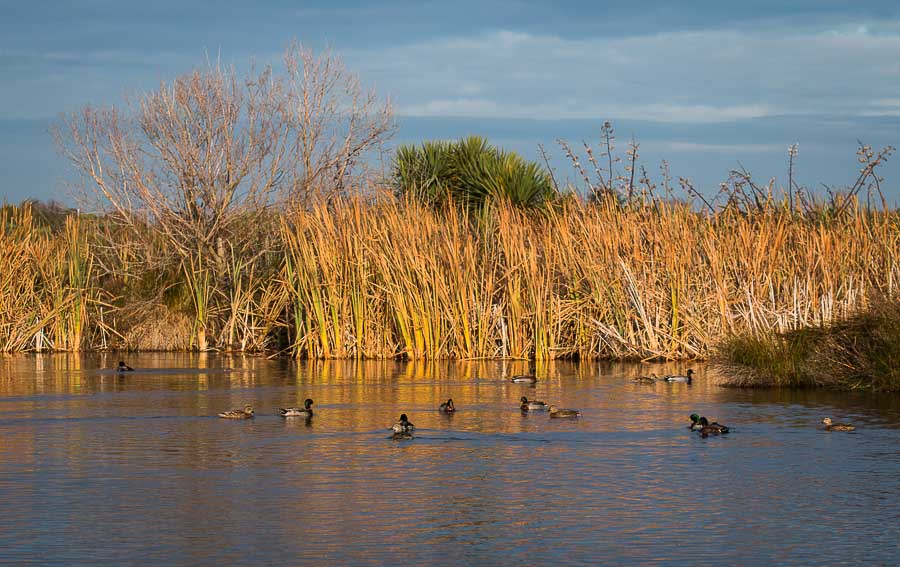 Te Rauakaaka Nature Reserve is a popular area for fishing, and you can access the Waimakariri River via the track next to the river. The stopbank also has a good walking track which runs from Brooklands to the Stewarts Gully Sailing Club. The site is still in early development stages but will eventually have more walking tracks through the area.

The Te Rauakaaka Nature Reserve (approximately 144 hectares) is located on the south bank of the Waimakariri River, near the entrance to the sea at Brooklands, approximately 10 kilometres north of Christchurch. The area contains regionally-significant saltmarsh and freshwater wetland habitats. It is an integral part of the nationally significant Brooklands Lagoon wildlife habitat supporting populations of threatened swamp birds and waders such as marsh crake and Australasian bittern.

In 1880, Hori Kerei Taiaroa identified the south bank of the Waimakariri as Te Rauakaaka, a settlement and food production site. The food included aruhe (fernroot), tuna (eels), panako (fern species), duck (grey and paradise) and pora (turnip). Herries Beattie wrote the name Te Rau-a-Te-Kaka (the gathering or netting of Te Kaka — this personage was apparently named after the kaka parrot).

In 2011 a management plan was formalised to strengthen and enhance the existing wetlands and ecological corridor to connect the river habitat network and enhance and protect the natural values. It will also ensure that recreation opportunities are consistent with protecting the natural setting. This management plan also contains a comprehensive weed control plan spanning many years that will ensure the native vegetation is not overwhelmed by exotic weeds.

The main entrance is just off Kainga Road, off Main North Road near the Old Waimakariri Bridge. To access the nature reserve, turn right and drive to the end of the road. From here you can access the reserve via the Stewarts Gully Yacht Club grounds. Alternatively you can access the stopbank track at Brooklands near the boat ramp. 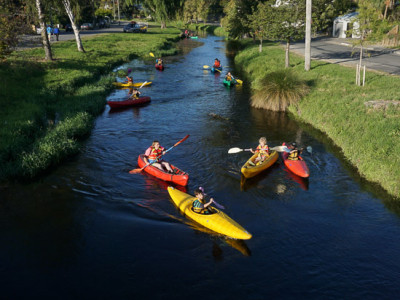