Our seasonal outlook indicates how much water is in Canterbury's soils, aquifers, rivers and streams, compared against the long-term median for that time of year.

It's been a record-breaking wet winter! July 2022 was the wettest month Christchurch has ever recorded. One rain gauge in the upper Waitaki measured 116mm of precipitation in a 48-hour period, the most we've ever recorded at that location. Unsurprisingly, this has left river flows high, groundwater levels high and soils much wetter than normal, and this may lead to reduced water demand as the irrigation season begins.

Unsurprisingly with all the rainfall and river flow groundwater levels are also very high, with over 85% of wells above the median and one in three wells the highest they've ever been measured in August.

Average groundwater levels occur in the Ashburton and Southbridge areas, but this is much higher than the low levels that had persisted in these areas since early 2020.

In the Upper Waitaki, groundwater levels are significantly higher than we have ever measured before in our 15 years of monitoring. 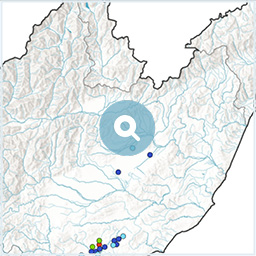 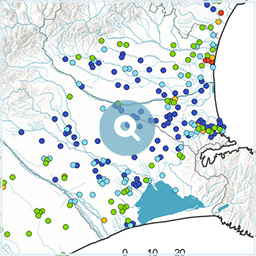 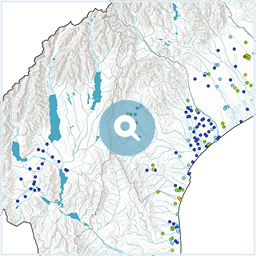 In July the rivers responded to significant rainfall on top of heavy snowfalls over a number of events. Several recorder sites were damaged or destroyed. Some rivers reached their highest flows on record, including Omarama Stream which caused significant flooding in and around the town of Omarama in the middle of the month.

August median monthly flows at most locations shown in the North, Central, and South Zone maps are much higher than the long-term values for August. There are a few exceptions for spring-fed streams and streams on Banks Peninsula, which had closer to average values for August. 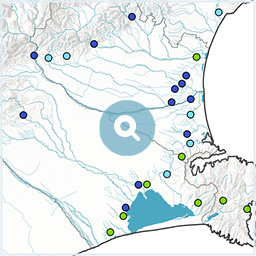 Wetter than normal soil moisture levels are reflective of the wet winter we have had throughout the region. The Kaikoura area was further boosted by some late August rain.

Soil moisture data and imagery is provided by NIWA. 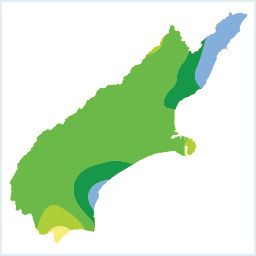 What a wet winter! It ranged from wet to very wet for most of the region, particularly in the west, with many rainfall records broken. July 2022 was not just the wettest July, but the wettest month on record for Christchurch.

Our rain gauge located in the upper Omarama Stream catchment recorded 116mm in a 48-hour period, which is the maximum recorded since our records began in 2007. 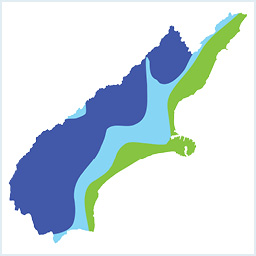 Here you can find a summary of previous seasonal outlooks. Click on the accordion to read more about a particular season.

Average, average, average is the picture as we head into winter months in Canterbury. The general picture shows us average rainfall, average river flows, and many groundwater levels average over most of the region. The exception is temperature. NIWA tells us it was the second-equal warmest autumn on record for Aotearoa New Zealand with temperatures well above average for the Canterbury high country.

Groundwater levels were average over most of Canterbury for autumn following average rainfall and river flow.

Because of the recharge boost from higher rainfall and river flows in the 2nd half of 2021, even though groundwater levels are currently declining they remain at average levels. In May, around 60% of wells were above median levels for that time of year. At the same time in 2021 prior to the high rainfall and flow events, only 7% of wells were above median levels. Local high and low levels can often be attributed to changes in recharge from irrigation schemes, in some areas new scheme have led to elevated groundwater levels compared to the past, and in other areas historic schemes becoming more efficient has led to lower groundwater levels.

Autumn flows at most of the Canterbury river and stream recording locations have been average compared to previous autumn flows. This matches with mostly average rainfall across the region.

Gorge flows in the alpine-fed Ahuriri, Rangitata, Rakaia and Waimakariri rivers are exceptions to the average trend and show lower than average median flows for autumn.

Trends show rainfall was within normal levels over the past three months, with lower than average rainfall across part of the coast.

A wetter than normal summer has left healthy soil moisture, river and stream flows, and groundwater as temperatures begin to fall and peak irrigation ends for the season. The effects of the increased rainfall that come with a La Niña system were felt across Canterbury, but more acutely in the northern half of the province.

Groundwater levels have risen significantly from extreme lows in June 2021 due to high rainfall.

Summer flows in most of our rivers and streams have been highly unusual and generally match the unusually wet summer rainfall. This is reflected with very high median flow values for February at most sites.

This pattern is seen across the northern part of the region from the alpine rivers in the west to the smaller Kaikōura streams. It is repeated across most of central Canterbury, and even Banks Peninsula streams showed very high median values for February. In South Canterbury there are a few sites showing high flows, but most are very high.

Summer 2021/2022 was very wet in the north and mid parts of Canterbury. For the rest of the region rainfall was average.

With several precipitation events and a few nor-westers over spring, we enter summer with soil moisture at healthy levels across Canterbury, while groundwater levels across most of the region are near or slightly below median levels for the time of year.

Groundwater levels in early summer have begun to decline from spring highs, as temperatures increase and irrigators pump more groundwater.

Spring rainfall throughout the region was similar to expectations and this is reflected in many of the median flow values for November. The majority of sites in North Canterbury are showing average median flows in both the large alpine and small coastal catchments.

Central Canterbury is more variable, with values mainly ranging from average to low, including some foothill sites and some spring-fed streams. A couple of Christchurch city sites show very high median flows for November.

South Canterbury is also a mixed picture, with several sites showing high November flows compared to normal, while a significant number of sites flowing at average or low rates.

Early summer soil moisture levels are average to slightly below the long-term median for the season in most of North Canterbury, with coastal Kaikōura and Banks Peninsula the driest areas.

For most of mid- and South Canterbury, soil moisture is higher than expected for early summer, especially in the upper Waitaki and Mackenzie country.

Spring rainfall was close to the long-term median level for the season across Canterbury, with some of the alps receiving slightly more rain than expected, and some coastal areas slightly less.

Heavy rainfall and high river flows in late May significantly changed the groundwater picture across much of Canterbury.

Groundwater levels were at record lows in many places, but recharge from the wet weather has benefited most areas.

In most shallower wells, groundwater levels have returned to near median for the time of year. Levels in many deeper wells are still below median.

Water levels are below median in around 58% of the wells we monitor, an improvement from 93% in May.

River and stream flows were very low throughout most of the region through Autumn, but significant rainfall at the end of May changed the picture completely, and floods resulted in central and southern foothill catchments.

A number of foothill sites have recorded higher than the long-term median flow for the month of June, while a number of springfed and lowland streams are still recording below median flows.

Banks Peninsula streams are flowing at about normal for June.

Soil moisture over much of the Canterbury plains was exceptionally low until the heavy rainfall event in late May.

That rainfall and subsequent precipitation in June mean that soil moisture as of 1 July was slightly above or well above normal levels for this time of year across most of Canterbury, with only South Canterbury and the eastern Banks Peninsula drier than normal.

The extreme rainfall event of late May resulted in rainfall well above the three-month normal for a large section of the mid-Canterbury foothills and a section of the plains.

However, when balanced with the proceeding dry months, the rest of Canterbury saw average rainfall levels for the period.

Groundwater levels are typically the highest in spring because of recharge over winter and recovery from the pumping of the previous irrigation season.

In early 2021, groundwater levels in most wells, especially on the plains, were very low until heavy rainfall in late May.

Levels have fallen slightly from the highs of June, but in most shallow wells, particularly those close to the foothills or near rivers, levels remain within the normal range for the time of year.

In some areas, groundwater levels did not benefit from extra winter recharge.

In the coastal Ashburton-Rakaia area, the Leeston-Southbridge and Tai Tapu areas, Coastal South Canterbury and in Waipara, groundwater levels in deeper wells have been very low since early 2020, and some wells are entering the irrigation season with levels at record lows.

Significant rainfall in July and August in northern and western Canterbury has helped to keep flows high throughout the alpine catchments and in some of the northern foothill catchments.

There was even some out-of-river flooding in the Waiau catchment in mid-July, after the significant rain event that thrashed Westland and Marlborough also reached into Canterbury.

River flows in the central and southern foothill catchments and in most of the spring fed streams from the Ashley River south were generally average-to-high in August, while flows in Banks Peninsula streams were near average.

Soil moisture levels over most of Canterbury plains were near normal at the beginning of September, with some slightly wetter areas along the coast in northern and southern Canterbury.

Winter was wetter than normal in the west, particularly in the mountains north of Aoraki/Mt Cook. The rest of the region generally had normal rainfall.