The Ōtūkaikino River has won the Supreme Award for Most Improved River at the 2018 New Zealand River Awards in Wellington.

Phosphorus was the indicator that was used to determine the most improved river this year, with trends in other key indicators also being examined.

Cawthron Foundation and NZ Rivers Trust chair Dr Morgan Williams said the Ōtūkaikino River had very good water quality with its phosphorus levels decreasing by 17.5 percent per annum over the past ten years.

Councillor Cranwell said it takes a whole community to achieve such great outcome.

“The improvements in the Ōtūkaikino show what can be done when people and organisations work collaboratively – and provide inspiration for others to either get started or continue in their efforts to improve our natural environment.

“Environment Canterbury and the Christchurch West Melton Water Zone Committee have supported the project work in the Ōtūkaikino catchment, including providing money for biodiversity and ecological restoration."

“We consider the Ōtūkaikino an outstanding example of what can be achieved when people work together,” Cr Cranwell said.

About the Ōtūkaikino River restoration

The Ōtūkaikino River is located north of Christchurch and arises from a number of spring-fed streams. It is fed by shallow groundwater flowing through gravels from the Waimakariri River.

There are multiple tributaries that flow through flat, predominantly rural land until it joins the Waimakariri River main stem just upstream of State Highway 1. The Groynes recreation area is a key area of the catchment where planting and fencing have been a focus.

The Ōtūkaikino River restoration started sixteen years ago when a planting and fencing programme commenced after a Christchurch City Council (CCC) ranger had conversations with landowners about water quality.

These conversations led to farmers fencing off land to prevent stock entering the waterway and within a few years there was a buffer zone of between 20-100 metres.

This made way for an extensive planting programme, which has been a key factor in reducing phosphorus.

Today, nearly the entire length of Ōtūkaikino River is fenced – estimated to be around 10km – meaning stock can’t access the water. It is estimated that 195,000 native, locally-sourced plants have been put into the ground.

Department of Corrections Community Service workers have cleared willow, blackberry, gorse and broom, then planted and mulched banks. Their efforts have been augmented by local scout and school groups, plus an annual Trees for Canterbury Planting day.

About the New Zealand River Awards

The Awards were established by the Morgan Foundation and the NZ Rivers Trust in 2013. They receive valuable support from regional and local councils and many other freshwater stakeholders.

Cawthron Foundation took over running the River Awards in 2017. The Foundation has had generous financial support from Lane Neave, Tourism Holding Limited, the Department of Conservation, Ministry for the Environment, and the Gawith-Deans Family Trust for the 2018 Awards.

The 2018 NZ River Awards dinner and the ceremony was held in Wellington on 13 November. The keynote speaker was Simon Upton, Parliamentary Commissioner for the Environment.

Cawthron Foundation is a charitable trust launched in 2015 to raise donations, bequests and endowments for public good science, as well as scholarships to support talented emerging scientists. 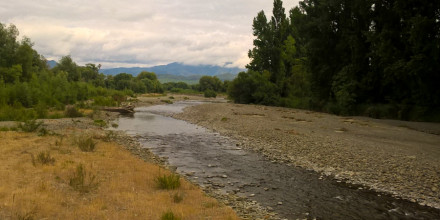