Shifting role of the Waimakariri River

Long before the Waimakariri River became a source of food for Māori, a water supply for farmers and a recreational hotspot for the half-million people living on its borders, it was quite literally a world builder.

For thousands of years it has continued the legacy of mighty ice age glaciers that carved through the Southern Alps, pulling loose rock and sediment from its headwaters near Arthur’s Pass and sending them forth in a great alluvial wash from the mountains to the sea.

Together with other braided rivers, the Waimakariri fanned out in a vast network of shifting streams.

Loads were deposited in such quantities the coastline was driven eastward and New Zealand’s largest area of flat land, the Canterbury Plains, was created.

Rains pushing over the Alps keep the process alive today by contributing 90 per cent of the river’s water, while the mountains, still young and soft in geological terms, continue to be worn away by the swift, fluctuating waters. Erosion roughly matches the rate mountains are pushed upward by moving tectonic plates.

Efforts to tame the great, braided Waimakariri started with the arrival of European settlers, as farmers and urban dwellers strove to manage the risks posed by a powerful river that regularly floods and changes path.

At one time, the Waimakariri ran through what is modern day Christchurch; at other times it exited at Te Waihora (Lake Ellesmere), south of Banks Peninsula; and even at the time of European settlers was split into two mouths, north and south of Kaiapoi.

Today, its lower reaches have been straightened, its banks confined, flood barriers installed and some of its water used for irrigation.

For 150 years, economic management for the benefit of settling Europeans was the overarching concern, much to the dismay of Māori and more recently the wider community as water quality issues become one of the country’s biggest challenges.

In a sign of changing moods, however, significant progress has been made over the past 10 years and officials at Environment Canterbury – the regional council charged with looking after the Waimakariri River – believe there is potential to make greater progress in the future.

Millions of people in dozens of countries observed the 12th annual World Rivers Day on Sunday, but few were on the doorstep of a river as remarkable as the Waimakariri.

Internationally, braided rivers are rare and Cantabrians would need to travel to the Himalayas or Alaska to find a comparable example outside the region.

Endangered native birds, rare plants and a multitude of fish species live within its sprawling boundaries, and the need to nurture that biodiversity is one of the pillars on which Environment Canterbury bases its work.

Other work includes flood protection, provision of areas for recreation, and the promotion of economic development.

Environment Canterbury senior biodiversity adviser Frances Schmechel said lessons only recently learned on other braided rivers are now being applied to the Waimakariri.

Many are focused in 17 ‘‘priority biodiversity areas’’ formed along with the Waimakariri River Regional Park in 2006 as part of a shift from flood protection only to more ecologically sound principles.

The creation and topping up of islands for birds to nest on; the removal of weeds that provide cover for predators; and riverside plantings to support eels, whitebait and other aquatic life are now showing promise, Schmechel said.

‘‘There’s a lot of potential if we can expand what we’re doing now,’’ she said, adding that the efforts are ‘‘all quite new’’.

‘‘We’ve known how to manage in bush for quite a while but we’re only recently learning how to manage these big braided river systems.’’

Of greatest concern to Schmechel are the river’s migratory birds, which nest on the gravel flats between July and February.

These include the nationally vulnerable wrybill, of which there are only about 5000 in the world, the black-fronted tern, which only breeds on the braided rivers of the South Island, and the black-billed gull, the world’s most endangered gull. 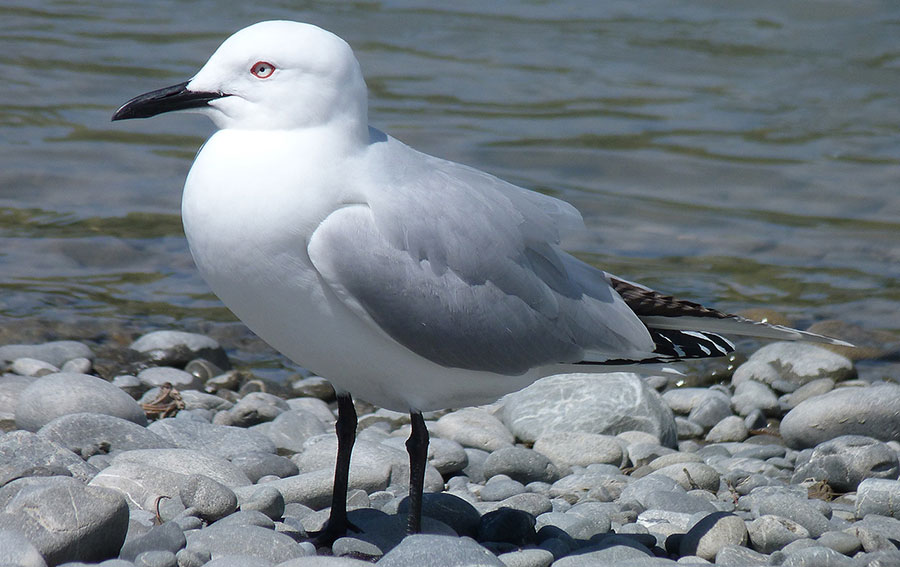 For much of the length of the river, human impact on water quality hasn’t been a major issue, says Environment Canterbury water scientist Adrian Meredith.

Interestingly, he says, droppings from native gulls nesting along the Waimakariri would have contributed a bacterial level that meant the lower part of the river may never have been very ‘‘swimmable’’ under current criteria.

"Because the big braided rivers carry so much gravel, they tend to sit perched on the plains and lose their water to the plains and not gain water from it until the very end."

"That has somewhat protected many of the big braided rivers from the water quality issues people are getting so upset about.’’

That 'very end' of the river, however, has in the past been badly polluted, with the Belfast meat works and regional and city sewage treatment systems for a long time discharging directly into the river and lower tributaries.

In 2007, the Waimakariri was identified as one of the 10 most polluted large rivers in New Zealand.

Since then significant improvements have been made: waste from the meat works is now piped to Bromley in Christchurch for treatment, following on from the rerouting of treated sewage in 2006.

‘‘These issues originate in the lowland tributaries that enter the very end of the river. It’s also the river flow issues that are concerning people.’’ Meredith says.

Under the 2004 Waimakariri River Regional Plan, up to 44 cubic metres per second of water per second is allowed to be taken from the river, mostly for irrigation. It is an amount Meredith says that has been vigorously debated and is probably at the very upper limit of what the river and its values can sustain.

With water coming out for farmland, the reduced flow is frustrating many recreational users, particularly fishers and boaties. 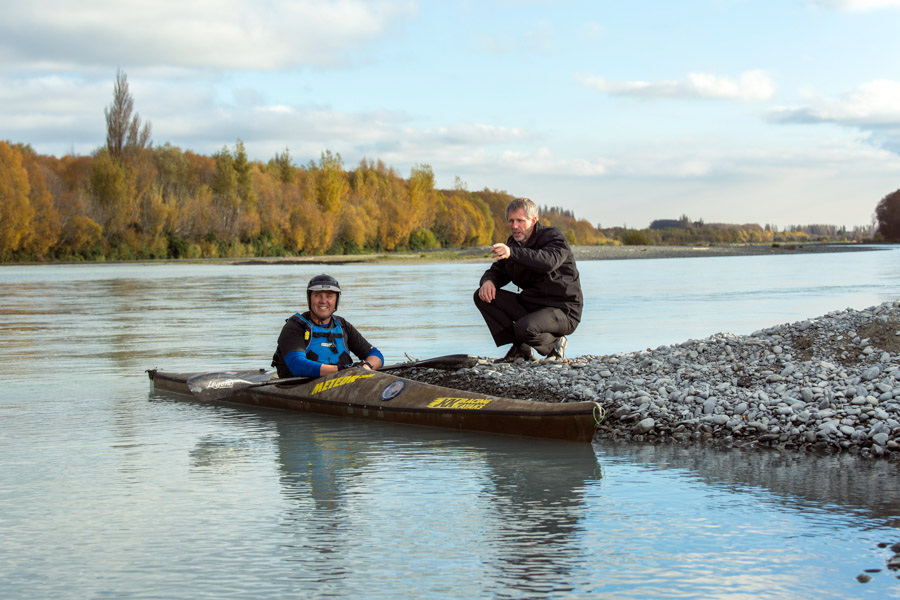 Kayaking on the Waimakariri, one of the many activities to do in our regional parks

Efforts to constrain the path and periodic flooding of the Waimakariri are central to many of the challenges posed by the giant and unpredictable river.

A major flood along the lower reaches in 1957 prompted a succession of works lasting until 1985, including the upgrade of a stopbank system more than 30km inland from State Highway 1.

Strategically placed on both sides of the river, the stopbanks are designed to protect against a one-in- 500-year event.  A $40-million, 10-year project to build a secondary stopbank to capture any overflow is now underway and due for completion in 2019.

Environment Canterbury’s principal river engineer, Ian Heslop, says secondary stopbanks are rare in New Zealand but in this case justified by the massive economic impact of a severe flood.

In January this year, heavy rains swelled the Waimakariri to a flow of about 2000 cubic metres a second, more than 17 times its average. With the secondary stopbank in place, Christchurch, Kaiapoi and Rangiora will be protected from flows up to a staggering 6500 cumecs.

‘‘This isn’t just for Christchurch,’’ Heslop stresses. ‘‘It’s a whole suite of works benefiting both sides of the river.’’

Most visible is the beautification of large stretches along the river within the 15,000-hectare Waimakariri River Regional Park, opened in 2006.

As part of the sea change towards sustainable management, the park includes toilet blocks, plantings of native trees and monitoring by rangers.

With it has come a dramatic reduction in the dumping of old cars and rubbish that used to plague the area.

The Waimakariri is currently New Zealand’s most fished river and a hotspot for jet boaters, kayakers, walkers, horse riders, hunters and off-roaders.

The man in charge of the park, ECan’s David Owen, says nearby residents have been quick to take advantage of the nicer surrounds.

‘‘We’ve provided increased biodiversity and better recreation activities, and people are responding to that. All that negative stuff just fell away,’’ he says. ‘‘It’s really positive.’’

The Waimakriri River at a glance 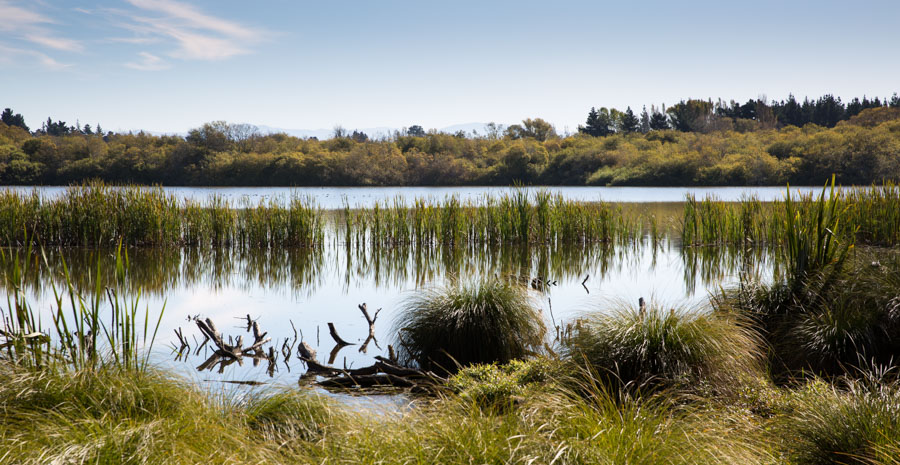 Tuna (long-finned eels) and inanga (whitebait) are taonga (treasure) for Ngāi Tahu because of their importance in mahinga kai (food gathering).

No one knows the food of the Waimakariri like the local iwi, Ngāi Tahu, whose culture was developed over hundreds of years alongside the region’s once-plentiful waterways.

But for the past 120 years, the relationship between Māori and the Waimakariri has not been a happy one, says Rawiri Te Maire Tau, an associate professor at the University of Canterbury’s Ngāi Tahu Research Centre.

For Ngāi Tahu, the Waimakariri River is an ancestor whose waters are an inheritance to sustain the tribe. Food from the river, particularly eels and whitebait, was a lifeline effectively cut-off by the settler government and the farmers they primarily represented, Tau says.

A series of land sales by Ngāi Tahu in the 19th century meant Māori retained customary rights over specific sites along all their major rivers.  However, problems soon arose from trout caught in eel weirs on the Waimakariri.

After a group of Ngāi Tahu were prosecuted in the late 1890s for taking trout from the river, they effectively stopped using the Waimakariri, Tau says. Meanwhile, other lagoons, tributaries and streams dried up as farmers drained surrounding land.

Water quality concerns are just the latest in a long and painful history of one-sided river management, Tau says.

‘‘In the end, you can’t manage something if you don’t own it,’’ he says. ‘‘This is a tragedy of the commons.  No one ever washed a rental car.’’

For Ngāi Tahu, the Waimakariri River is an ancestor whose waters are an inheritance to sustain the tribe.

As it stands, there are very few places Māori can still gather their traditional foods despite past assurances, and a ‘‘grumpy’’ mood prevails among iwi across the region, he says.

David Perenara-O’Connell from Environment Canterbury says the council and Ngāi Tahu have a very open, robust and developing relationship.

It enables water management issues and solutions to be discussed frankly, with a wide range of options on the table.

There is a wide acceptance that there are legacy issues, but there is also agreement about what needs to be done, and the challenges now are around how quickly improvements can happen and who bears the cost, he says. 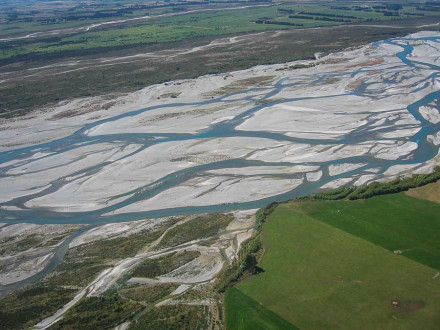