What does it mean when people talk about a 1-in-100 year flood? We can explain probabilities. 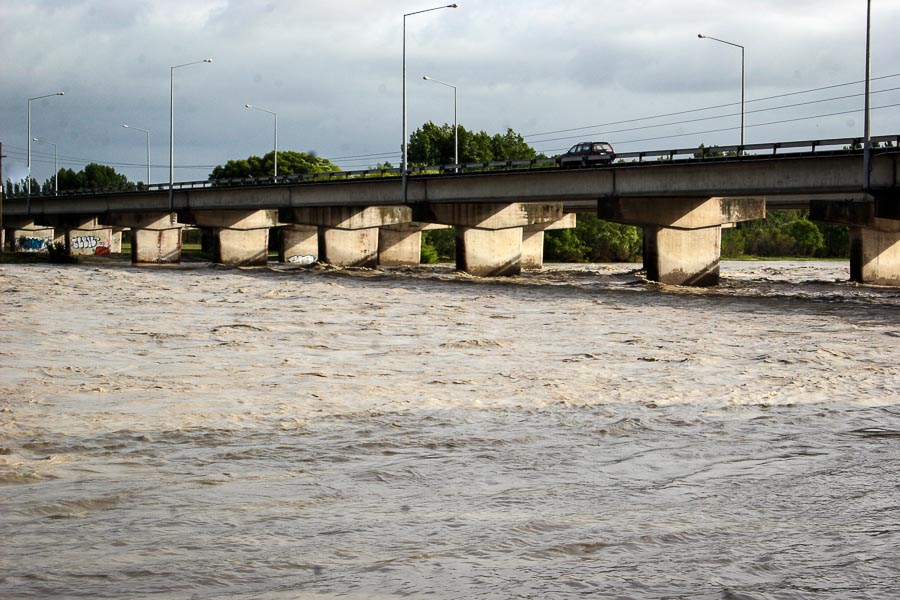 How we talk about flooding probabilities
The terms AEP (Annual Exceedance Probability) and ARI (Average Recurrence Interval) describe the probability of a flow of a certain size occurring in any river or stream.
ARI is the average time period between floods of a certain size. For example a 100-year ARI flow will occur on average once every 100 years.
Alternatively, AEP is the probability of a certain size of flood flow occurring in a single year. A 1 per cent AEP flood flow has a 1 per cent, or 1-in-100 chance of occurring in any one year, and a 10 per cent chance of occurring in any 10 year period.
Therefore, the 100-year ARI flow and 1 per cent AEP flow are different terms to describe a flow of the same size in any given river.
What are the chances of a flood affecting me?
Flood protection works vary significantly across Canterbury.
For large towns and cities such as Christchurch or Ashburton, or Washdyke in Timaru where major assets are located on a floodplain, the level of protection afforded from stopbanks and other river control works is relatively high.
For these areas the probability of a flood occurring is relatively low and stopbanks are designed to contain 200 to 500-year ARI flows or (in the case of Christchurch) even larger return period flows.
For smaller settlements or rural areas, the level of flood protection tends to be less.
The probability of being flooded in these areas depends on where you live, but for many people living on a floodplain the chance of a major flood occurring is about 1-in-50. This means that over the next 50 years a major flood will almost definitely occur somewhere in the Canterbury region.
Probability of flooding
This table that shows the probability of certain sized flood events occurring over a range of time periods (one, 10, 30 and 70 years).
While the probability of a major flood occurring in any one year is relatively low, the probability of a flood occurring over the lifetime of a person (or building) increases significantly.
A 100-year ARI flood occurred 10 years ago. Does that mean there will not be another for 90 years?
No. While on average, the 100-year ARI flow may occur once every 100 years, the probability of a flow of that size occurring in any particular year does not change. This is best described using the term AEP (Annual Exceedance Probability).
If a 1 per cent AEP flood flow was recorded this year, the probability of another flow of that size being recorded in the following year (or any other subsequent year) would still be 1 per cent.
It is statistically possible to have several 100-year ARI flows over a single period of 100 years just as it is statistically possible to go for 100 years without a single 100-year ARI flow recorded.
Is the 100-year ARI flood twice as large as the 50-year ARI flood?
No. The ARI of a flood is simply a statistical term that indicates the probability of a certain flow occurring in a river. The 100-year flood is not twice the size of the 50-year flood, just as the 500-year flood is not five times the size of the 100-year flood.
For most rivers the increase in flow between the 100-year and 500-year ARI floods may be about 30 per cent to 40 per cent. When considering this in terms of actual rainfall the difference between a 100-year ARI and 500-year ARI river flow may only amount to a few extra hours of very heavy rain.
Below is a table for the Waihi and Te Ngawai Rivers showing this.
Is the 100-year flood flow the same for every river?
No. The flow assigned to a particular ARI flood event completely depends on the size of the river. In the Rangitata River, the 100-year flow is assessed as 3900 cumecs, whereas for the much smaller Waihi River the 100-year flow is 230 cumecs.
As well as catchment size, variability in the amounts of rain that fall in different catchments will also affect ARIs during any given flood. In a major flood that affects numerous rivers, the return period of the flow generated in each river will vary across the region.
Example:
A good way to demonstrate these points is using the example of the March 1986 flood and how it affected Pleasant Point and Temuka townships.
Pleasant Point is floodable from the Te Ana a Wai (Te Ngawai) River. The flood risk to Temuka varies, with the southern, mostly industrial part of the town floodable from the Temuka River and the town centre and more northern residential areas floodable from the Waihi and Orari Rivers.
In the 1986 flood, large amounts of rain fell in the Te Ngawai and Temuka River catchments while considerably less rainfall affected the more northern Waihi and Orari catchments. Because of that rainfall distribution, the Te Ngawai and Temuka Rivers recorded flows with ARIs in excess of 100 years and flooded Pleasant Point and the southern end of Temuka respectively.
The Waihi and Orari Rivers in contrast, recorded flows of about a 60-year and 20-year return period respectively and as a result did not break out and flood into the northern residential part of Temuka.
Does the flow assigned to a particular return period always stay the same?
No. New Zealand is a young country and the period over which river flow and flood records exist is relatively short.
As records increase for a particular river, and improvements in the way river flow is measured are made, we can assess the probability of certain flood flows more accurately. For this reason, we review and update the return periods assigned to different river flows every five to 10 years.
Climate change and its related impacts on the occurrence of extreme weather events and on rainfall distribution are also likely to alter the frequency at which various river flows occur and therefore affect the flows assigned by Environment Canterbury to particular Average Recurrence Intervals.
Natural hazards
Environment Canterbury © 2022
Retrieved: 11:07am, Tue 18 Jan 2022
https://www.ecan.govt.nz/your-region/your-environment/natural-hazards/floods/flood-probabilities/