In December 2019 the Rangitata River broke out of the main channel at three key locations causing major damage to flood protection, roading, rail, farm, electricity supply and other assets.

Access across the river was cut at SH1 and SH79, the rail corridor was cut off, telecommunications and power were cut, and goods couldn’t get through to the lower South Island. 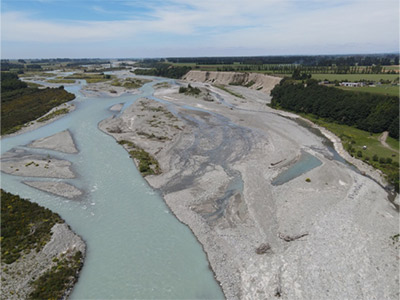 Emergency works were undertaken to retain ongoing and future flood flows within the main channel.

Immediately following the flooding of 2019/20, our priority was to stop the outflow of floodwaters from the river onto the adjacent floodplain and over key roads.

Emergency works were undertaken to retain ongoing and future flood flows within the main channel.

Bulldozers were used to construct three temporary gravel bunds, one across each of the breakout flow paths, and other river works to divert active braids away from the breakout locations.

New flood protection and erosion control infrastructure and tree planting were then needed to protect communities and critical lifelines such as road, rail and communication networks.

1. ‘Make It Safe’ - flood recovery works at the Rangitata River

The first workstream addressed the immediate flood risk to the community with ‘Make it Safe’ flood recovery works that started in the awa Rangitata mid-April 2021. The works were completed in January 2022, with only flood protection planting and weed control works remaining. 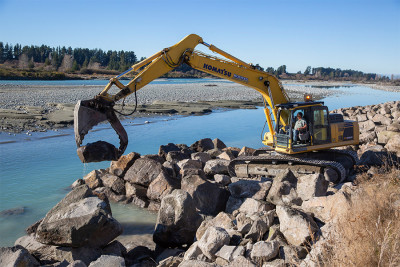 Five rock groynes have been built on the Rangitata River south of Arundel Bridge. Deep scouring of banks on the lower Waitaki River caused by the 2019/2020 flood event.

Workstream two of this project involves the remediation of 12 critically damaged sites on the lower Waitaki River caused by the same weather event that caused breakouts on the Rangitata River.

Several sites were subject to deep scouring from the floodwaters which caused major erosion of adjacent land.

At the end of 2022, works were completed at the majority of sites.

As of March 2022, there were nine science investigations in progess for the awa; planning for a major natural infrastructure programme focusing on planting and weed control and; exploration of wetland and mahinga kai enhancement opportunities.

Peel Forest landfill works have been completed along with the first round of planting.

This was a joint project between Environment Canterbury and the Timaru District Council to manage the erosion risk at the Peel Forest closed landfill, located on the right bank of the awa Rangitata.

The planned works are a temporary measure to reduce the risk of landfill material being eroded into the river whilst a long-term plan for the management of the closed landfill is developed.