The $40 million Waimakariri Flood Protection Project will reduce the risk of flooding in Christchurch city and Waimakariri and Selwyn districts. It will add strength and resilience to the flood protection system already in place and significantly lower the risk of break-out during major flood events.

Flood protection works in the region

Construction began in 2010 and will be completed in late 2019. Once finished, the 25km secondary stopbank system will provide back-up flood protection for the already high level provided for Christchurch.

Other important works included the upgrade of 35km of primary stopbanks and 8km of rock bank work to improve protection for parts of the Waimakariri and Selwyn districts and the Coutts Island and McLeans Island areas.

The first 15-kilometre length of secondary stopbank has been completed and runs from the Northern Motorway Bridge to Cross Bank at McLeans Island. The flood protection on the northern side of the river has also been strengthened through stopbank upgrades and rock lining.

Major floods in the region

Many areas in Canterbury have been struck by major floods during the past 150 years. In Christchurch, floodwaters were sometimes knee-deep in the central city in the late 1800s and early 1900s.

During early European settlement, regular river overflows occurred over the floodplain areas in and around Christchurch and Kaiapoi. Since the primary stopbank was completed in the 1930s, the Waimakariri River hasn’t flooded through the city.

The most recent break-out, which occurred in December 1957, flooded parts of Coutts Island in Belfast and Kainga and was just under 4,000 cumecs. 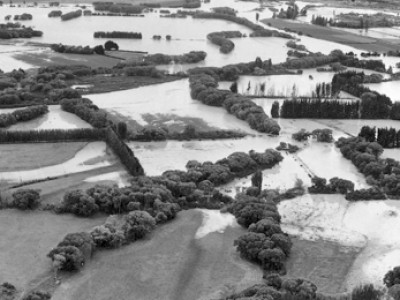 Flooding can strike at any time

Flooding can have devastating effects on a region. Environment Canterbury has taken significant steps to reduce the risk of potential flood damage from the Waimakariri River.