Outstanding services to the environment over several years were acknowledged with awards to three people at Thursday's Environment Canterbury council meeting.

Ray and Maree Goldring have spent several years working with Environment Canterbury, other agencies, the community and landowners to restore and protect the landscape in the upper Waimakariri River Basin, leading the fight to stop the alarming spread of contorta pines across the high country basin.

Ray has been chair of the Waimakariri Ecological and Landscape Restoration Alliance (WELRA) since it was formed in 2008. Members represent local landowners and lessees, ratepayers, the Department of Conservation, Environment Canterbury, the Canterbury Environmental Trust, the New Zealand Conservation Trust and individual conservationists. WELRA has been successful in securing $6m funding from a variety of public and private sources, becoming a major stakeholder in the largest community-initiated wilding conifer control programme in New Zealand.

On average it clears 12,000 hectares using both professional contractors and volunteers, with wildings likely to be eradicated from the basin within the next two years. Their work has been a model for other similar initiatives to follow.

The Trust also worked to remove invasive pest plants and maintain open cobble river habitat for a rare dinosaur-aged grasshopper Brachaspis "Broad Stream" when it was discovered about 2010 to support the grasshopper and three endangered plants – Kirks Broom, Waimakariri Helichrysum and Walls Coprosma.

Maree was a member of the Selwyn Waihora water zone committee for seven years until her retirement in 2018, progressing a well-supported and strategic Immediate Steps biodiversity programme in the Hororata catchment, wetlands and the high country.

Ray and Maree both provided input to the Canterbury Regional Pest Management Plan 2018-38 and instrumental in helping the Council make the plan operative.

Maree is currently a member of the central Biosecurity Advisory Group, which provides advice to and support for regional biosecurity programme delivery in central Canterbury.

Ray and Maree have recently retired to Geraldine and set in motion the establishment of the Trapping Alliance Trust, helping locals establish a trap library.

Ken Taylor‘s outstanding contribution to the water management of Canterbury and New Zealand was also acknowledged by the Council.

In 1996 he edited a substantial tome on Te Waihora (The natural resources of Lake Ellesmere (Te Waihora) and its catchment) that is still a wonderful reference book on the lake and set in train a long involvement with Te Waihora.

This has included leading Environment Canterbury work on setting directions and sponsorship of the co-governance framework for Te Waihora with Ngāi Tahu, a personal career highlight. 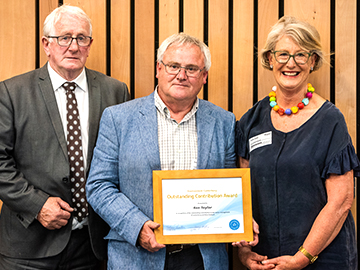 Building a legacy in water management

Ken was Director of Science and Director in Charge of the Canterbury Water Management Strategy (CWMS) from 2008 until 2016.

He played a key role in developing and implementing the CWMS and particularly in making sure the science used in water planning was of top quality but also readily accessible to the community.

Ken led the work with primary industry to develop Good Management Practice guidelines for farming and the matrix for Good Management project to translate those GMPs into numeric limits for plans.

This was a hugely complex project involving multiple science agencies and industry partners.

Although the award was made for Ken’s role in water management, Council cited two other parts of his career of particular note.

A lead role in dealing with Christchurch properties potentially contaminated from previous uses, and his leading role in the drive for better air quality in Christchurch, ensuring good science to drive the policy changes delivered in the Natural Resources Regional Plan and the Canterbury Air Regional Plan.

Keeping up the good work

Since leaving Environment Canterbury in 2016 Ken took on the challenge of the Director role for the newly established Our Land & Water National Science Challenge.

He has made sure the Challenge is well-grounded with stakeholders and was a key leader in ensuring Te Ao Māori is a thread throughout the Challenge’s work, and also that science is co-designed with partners. He has been hugely influential in water management at a national level.

Ken retired from his role with the Our Land and Water National Science Challenge in March 2020 (immediately prior to the Covid-19 lockdown) and has settled into a life of looking after grandchildren; working on his crib in Central Otago and pottering at science while writing papers in his leisure.

Help to improve water quality on your farm. 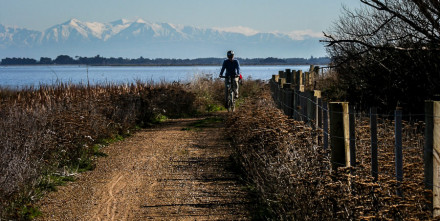