An environmental lawyer in the making has become the first youth member co-opted to a water zone committee and is carving a pathway for others to follow in her footsteps.

Erana Riddell, 21, never intended to end up on the Banks Peninsula Water Zone Committee. Following a presentation she gave to committee members in 2018, on a youth hui she was involved with, something made her go back to the committee for the following meeting.

“I enjoyed it and thought to myself ‘I might go along to another one,’ and then, ‘maybe a bit longer next time’, you know, that kind of thing,” Erana said.

“Then before I knew it, the members had asked for me to be co-opted as their youth representative for the area. I think I landed a really good gig, to be honest,” she said.

Erana was co-opted to the committee in February 2020, just a month before the country went into Alert Level 4 lockdown due to COVID-19.

In the last meeting before lockdown – Erana’s first as a full member – she felt out of her depth, with lots of homework to do on focus areas for the zone and committee. But with time, it became easier.

“I think I would’ve been the youngest there by maybe 15-20 years at the time I first spoke,” she laughed.

“The first time I went in as a board member I thought there would be a lot of catching up to do, but everyone was really welcoming and helped me along the way.

“I’m only new to the space, so I’m still learning a lot, but I’m enjoying catching up on topics of interest and the help from the other members,” she said. 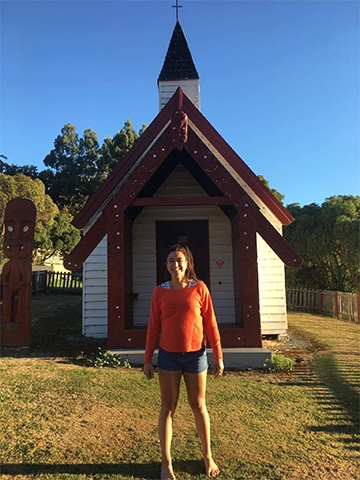 A Cantabrian through and through

Born and raised in Christchurch, Erana attended Lincoln High School and is currently four years into studying a double degree in law and arts at the University of Canterbury.

“I’m keen to get into environmental law and planning a bit more in the future, maybe at the rūnanga level, but at what capacity I’m still unsure yet.

“I’m Ngāi Tahu, and whakapapa to Wairewa and Kaikōura on my dad’s side, and Ngāti Porou on my mother’s,” she said.

With her first official meeting now under her belt, Erana said she is feeling more like a full committee member than when she started. She hopes to see other zone committees around Canterbury co-opting youth members in the future.

“I guess my goal in all of this now would be to create a pathway for other youth with similar interests, to keep them connected,” she said.

Pictured: Erana Riddell is the first youth member to be co-opted by a Water Zone Committee.

Erana’s interest in the environment came about through the Selwyn Youth Council, before being “dragged along” to an Environment Canterbury Youth Rōpū (youth group) meet up by a friend.

Before long, she was an integral part of the rōpū. Her presentation to the Banks Peninsula committee came a year into her involvement with the group.

“I was 19 at the time (in 2018) so it could’ve been pretty daunting. But I’d met a couple of the zone committee members here and there, so it was a reasonably comfortable thing to do – speaking to people I already knew – and it’s turned into so much more from there,” she said.

Most recently, Erana was given the opportunity to work casually for Mahaanui Kurataiao, a resource and environmental management advisory company, involved with eel/tuna monitoring alongside the National Institute of Water and Atmospheric Research (NIWA).

“Before this happened, I have to say I’d never even heard of NIWA,” Erana explained.

“(The project has) been delayed due to COVID-19, unfortunately. It is a six-month contract that was meant to be ending in June or July, but the project funding has been extended, so I think it’s supposed to be done at the end of the year now,” she said.

“It’s a new space for me but I’m looking forward to it.”