The most recent target for the crew of five is stopping the spread of seed-producing female grey willow trees around the edges of Te Waihora/Lake Ellesmere.

The controlling of invasive species builds on an earlier iteration of the project where willow and weed control – undertaken by contractors – was found to be effective but was only carried out at a few sites, which resulted in willows continuing to expand around the lake.

We fund the Weed Strikeforce team, which has successfully targeted weeds and achieved conservation gains for Te Waihora/Lake Ellesmere over the past two years.

Our programme implementation lead for Selwyn-Waihora, David Murphy, said in terms of visible results, this project is second to none.

“This is one of the biggest bang-for-restoration-buck projects around because once the willows and weeds are controlled on the lakeshore, natural regeneration occurs.

“Native plants will have the room to grow well without having to compete with the exotic species, so at most sites there is no need for planting and the associated costs,” he said.

The team reported that all willow and weed control targets for 2018-2019 were met, with willows and weeds controlled over 794.5 hectares.

“These sites are home to some of New Zealand’s most special and secretive swamp birds, such as matuku/Australasian bittern and koitareke/marsh crake. The Weed Strikeforce team will help to stop the loss of their native habitat caused by willows invading wetlands,” she said.

Between spring and autumn when the team isn’t controlling weeds, they support the complementary One Billion Trees project, with the aim of planting and maintaining 100,000 native trees around lakeshore reserves over three years.

The sites selected for planting are mostly where stock grazing was previously present, and where native regeneration won’t happen without help. Native trees such as kahikatea, mataī and tōtara, once common in the lakeshore wetlands, are being replanted.

Weed Strikeforce was developed as a three-year commitment from backers:

Find out more about the Whakaora Te Waihora restoration programme. 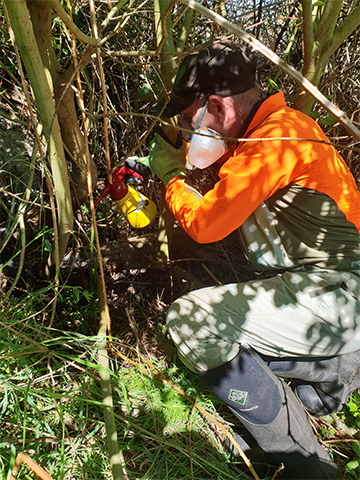 Pictured: Weed Strikeforce team members out and about on a day of weed control