Initial works are commencing in the Rangitata to protect the community from increased flood risk caused by the major floods of summer 2019/20.

In December 2019, the Rangitata Awa/River flooded damaging infrastructure and farmlands. The flooding destroyed a power pylon and disrupted road and rail routes; effectively cutting the South Island in two for three days.

Since then, damage to the riverbanks and flood protection infrastructure has left the local community with increased vulnerability to future floods. 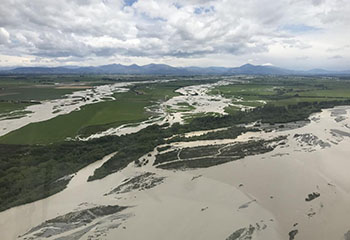 The Rangitata Awa in flood December 2019

The flooding experienced along the Rangitata River in December 2019 was the culmination of an extreme weather event that saw a combination of intense rainfall, and flows that were both high and sustained over time across the West Coast and Canterbury.

In the Rangitata catchment there were six days of heavy rain and three high river flows that peaked at 2307 cumecs (cubic metres per second) - this is about 35 times more flow than usual. During the third high flow Environment Canterbury recorded more than 2000 cumecs for an incredible 10 hours.

This extremely intense volume of flow caused severe erosion of the southern banks of the Rangitata River. Large areas of trees planted for erosion-control were lost and there were major losses to roading, rail, electricity supply and other assets. Flood flows broke out of the river and flowed down the south branch for the first time in 24 years causing damage to farmlands and equipment.

Following the flood, Environment Canterbury’s priority was to stop the outflow of floodwaters from the river onto the adjacent floodplain and over key roads. Emergency works were undertaken to retain ongoing and future flood flows within the main channel. This involved the use of bulldozers to construct three temporary gravel bunds, one across each of the three breakout points, and other river works to divert active braids away from the breakout locations.

Now, works are starting which will provide protection against future flood events.

Environment Canterbury Chair Jenny Hughey welcomed the start of ‘making it safe’ works which are slated for completion about the end of August.

“These works are urgently needed for the safety and security of the Rangitata community”, she said.

Flood resilience will be achieved through extension of emergency embankments erected immediately following the flooding, construction of new stopbanks and gravel groynes, and strengthening of rock stub groynes at five sites along the south bank of the Rangitata River.

At a construction cost of about $1.3 million, the works are 64 per cent funded by the central government’s Climate Resilience Programme of Flood Risk Management Projects (initiated as part of the COVID-19 recovery response) which is administered by the Provincial Development Unit (PDU) of the Ministry of Business, Innovation and Employment (MBIE) in a co-funding arrangement.

An ambitious programme for the Rangitata Awa 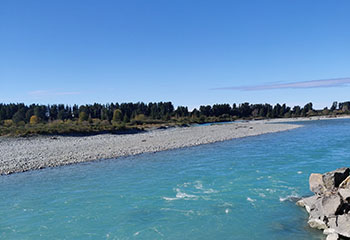 Whilst these physical works address the immediate flood risk to the Rangitata community from damage following the 2019/2020 flooding, they are a small part of a larger ambitious programme supported by climate resilience funding from the PDU which will see up to $24.2 million spent across the entire Canterbury region over three years.

River manager Leigh Griffiths says in addition to facilitating urgent repairs and supporting local employment, this funding offers a wider opportunity to accelerate regeneration of the natural environment and partner with mana whenua and other stakeholder groups to lead the way for climate resilience in the Rangitata.

"We are undertaking a series of investigations that will look at the opportunities for natural infrastructure enhancements and other works that support a community vision for the health of the Rangitata Awa.

“We look forward to collaborating with key partners in a holistic and innovative approach that we believe can facilitate transformative change to support the vitality of this awa/river as an important regional taonga/treasure,” she said.

Te Rūnanga o Arowhenua, the Department of Conservation, Environment Canterbury, Land Information New Zealand, Central South Island Fish & Game, Timaru District Council and Ashburton District Council have come together in a collaborative forum based on a shared vision and values to protect and restore the mauri/life force of the Rangitata Awa, ki uta ki tai/ from source to sea.

Together we are prioritising the health and wellbeing of the Rangitata Awa now and for generations to come.

Rangitata River – why did it flood and what happens now? 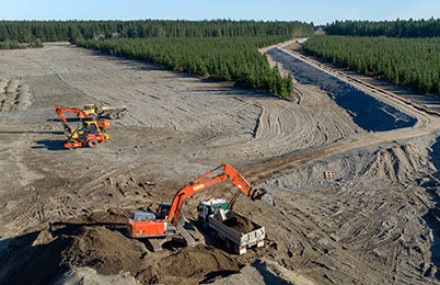 Find out about our programme to build community resilience to climate-change induced flood events.