As weather improves and clean-up begins following the extreme rainfall of late May, our monitoring is giving a picture of how the weather event affected our rivers and groundwater.

We record water levels at sites along Canterbury’s rivers and monitor hundreds of wells across the region to give us an idea of how much water there is at any moment.

Canterbury’s braided rivers have wide channels, and in normal or dry times, water flow can seem miniscule in such a large area between riverbanks. But when large rainfall events happen, we can see how these large channels – and the stopbanks constructed alongside many of the rivers – are necessary to protect nearby homes and farmland.

Flow meters in our mid-sized rivers show just how much river levels changed over a matter of hours in late May.

In the space of 20 hours, the Ashley River flow near Rangiora went from 0.2 cumecs to 1477 cumecs – or put differently, from 200 to more than 1.4 million litres per second.

Click on the graph to see river flow for the Ashley River at Cones Road.

Similarly, river flow meters in the Hakatere / Ashburton River showed a river jumping from 6 to more than 1500 cumecs.

Flood levels quickly receded, but flow remains much higher than before the rainfall.

Visit the River Flow Data page on our website to see information on all our metered sites.

Click on the graph to see river flow for the Ashburton River at State Highway 1.

Following months of dry conditions, the water table across Canterbury has already responded to the rainfall.

In late May, many wells were well below average levels for this time of the year, and in areas like West Melton, some were at record lows.

In some places, the water table has risen by less than a metre, and in others, more than two metres. In one monitored well near Yaldhurst, it has risen by five metres.

Environment Canterbury Groundwater Science Manager Carl Hanson said that while much of the rainfall rushed through the river systems out to sea, he expects that most of the rain that fell on the plains soaked into the dry ground.

“Out in the middle of the Canterbury Plains, far from any water courses, there’s really nowhere else for the rain to go,” Hanson said.

However, Hanson added that one large rainfall event does not make up for months of very dry conditions that much of Canterbury has experienced.

“Groundwater levels have certainly risen in response to this rain, but they’re still not as high as they have been after past wet winters.”

Visit the Rain fall Data page on our website to see information on all our metered sites.

In the Selwyn region, most of the land between the Rakaia and Waimakariri catchments drains into Te Waihora / Lake Ellesmere.

A torrent of water flowing down the Waikirikiri / Selwyn River – previously dry for most of its length – helped raise the lake level from less than 0.9 metres depth on 30 May to more than 1.3 metres four days later.

The lake has now been opened to the sea, and is slowly draining, alleviating flooding along the lake margins. Find out more about opening Te Waihora.

Click on the graph to check the latest water level in Te Waihora. 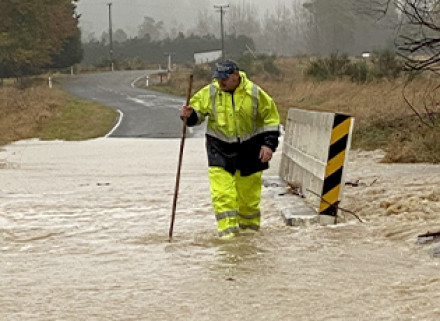 Find the latest updates on rainfall, river flow and key roading updates across the region.

Information to help respond to the region’s flooding.