Three of the four projects will be covenanted through the Banks Peninsula Conservation Trust or QEⅡ National Trust, requiring all current and future landowners of the site to manage the land for conservation purposes.

Together, the projects will protect native bush, streams and gullies; and enhance native species and their habitat, while improving water quality in the zone.

The Banks Peninsula Water Zone Committee works with the community, councils, rūnanga and other partners to develop recommendations for water management and projects to receive IMS funding.

Zone committee Chair Benita Wakefield is proud to be supporting local landowners to protect and enhance biodiversity and water quality throughout the zone.

“These projects highlight some of the collective effort that’s going on to improve the waterways and biodiversity values in our zone.

“They all contribute to the vision of ‘ki uta ki tai’ (mountains to the sea).

"Working alongside organisations like Banks Peninsula Conservation Trust and QEII National Trust shows the benefits in working as one,” Wakefield said.

More about the projects More than 25ha of gorse/kānuka dominated gullies will be fenced and then protected in perpetuity via QEⅡ National Trust covenant.

Fencing through IMS funding, and weed control carried out by the landowner will allow the area to revert to native vegetation, including riparian forest and wetland species.

The gullies, located on a sheep and beef station in the Whakaraupo catchment, are rich in biodiversity and ecological values including wetlands, native vegetation, and coastal forests.

The area potentially provides important habitat for lizards, banded kōkopu and kōaro (species of whitebait) among other things.

The project connects to several other neighbouring covenants, creating native cover over ki uta ki tai (mountains to the sea) from the top of Mt Herbert to Diamond Harbour below. The 12ha regeneration project in the Pigeon Bay catchment will take place on a sheep and beef farm which borders Pigeon Bay Stream.

There are patches of forest and wetlands throughout the property that provide ecological connectivity and raupō (bulrush) has been seen in the wetland areas and tūī can be heard in the tree cover overhead – both uncommon on Banks Peninsula.

Stencliffe landowners Hugh and Jane Eaton are enthusiastic about protecting a section of Pigeon Bay Stream.

With fencing and a covenant through Banks Peninsula Conservation Trust, “another part of Banks Peninsula’s precious forest will be protected,” said Jane.

The project has gained the interest of neighbouring landowners downstream who are now looking at how they can play their part too.

Just under 3ha of land on a beef farm in Okains Bay will be protected by a Banks Peninsula Conservation Trust covenant.

The landowners have one existing QEⅡ covenant on their property, with other covenants on neighbouring properties.

A variety of native species including adult mataī (black pine), kahikatea (white pine) and tōtara are present in the forest, with seedlings coming through in the undergrowth.

The trees make good homes for tūī, korimako (bellbird) and kererū (New Zealand wood pigeon) – all seen by the landowner.

Landowners Cynthia and Peter Thelning will be fencing an area of stream in Okains Bay.

“The area of native bush we have decided to covenant is a project we have thought about for some time," said Peter.

Stock will be kept out by the “fencing constructed around the Reserve, which will really preserve the flora in the area."

Two Goughs Bay gully habitats are set to benefit from fencing that will create a larger buffer zone from the water’s edge to filter out runoff and improve water quality for in-stream habitat.

The gullies provide habitat for several at risk or declining native species, which will be further enhanced by fencing them off to allow the understory to regenerate.

Goughs Bay landowner Marie Haley is looking to regenerate the farming operation and find natural systems to take some of the hard work out of farming.

“The fencing will protect blocks of bush that I played in as a child. Once I realised how degraded the understory was by grazing, I wanted to protect them so they can fulfil their fullest abundance and beauty,” said Marie.

If you would like to find out about funding or are thinking of applying, phone 0800 324 636 or email ecinfo@ecan.govt.nz.

Chair for Banks Peninsula Water Zone Committee, Benita Wakefield, provides a monthly update on what's been happening in the zone. 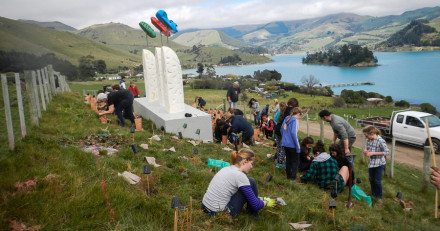 The Banks Peninsula water zone is made up of eroded volcanic domes that have been breached by the sea.