Home / News & events / Weeding out threats along the Ōtūkaikino River

Weeding out threats along the Ōtūkaikino River

Willows and other woody weeds infesting the riparian (land beside water) zone are being controlled along the Clearwater reach of the Ōtūkaikino River, home to some of Christchurch’s most distinctive wetlands.

The work is being project managed by the Water and Wildlife Habitat Trust (WWHT) after it received $34,500 in funding from Environment Canterbury.

The WWHT is looking to manage the weed threat in the Clearwater reach in stages, as funds become available. The waterway and associated wetlands are home to a number of threatened and locally rare plant species, including several orchid species. 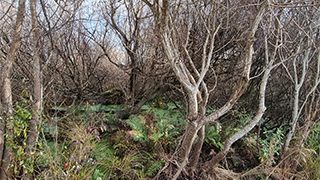 The waterway is heavily infested with grey and crack willows, which can out-compete indigenous species and decrease diversity, and reduce habitat for birds. These trees also use large volumes of water, which can alter hydrology.

The first stage, which the Trust has been working on over the last six months, involved controlling willows, blackberry, gorse, and old man’s beard along the south side of the Clearwater reach.

WWHT chair Mike Patchett said they’ve controlled most of the willows to allow them to stand and decay but some of the larger ones, which are in good form and condition, have been temporarily retained.

“They’ll help provide habitat, shade for the river, and bank stability - while allowing for the natural regrowth of native plants. The remaining trees will be removed once native vegetation is providing the same function.

“We will monitor this natural revegetation and may need to hand-plant some species over time to support a range of outcomes that assist with waterway health.”

WWHT engaged Wai-ora Trust’s ecological contractors for the willow and weed control and it also has a collaborative partnership with the Department of Corrections’ community work programme for complementary weed control work throughout the project area.

The Ōtūkaikino catchment is particularly important to Mike and the WWHT as it has the best water quality and ecological health of all of Christchurch’s waterways - which makes it even more important to protect, enhance, and restore.

“The Ōtūkaikino is rain and spring-fed from the Waimakariri River - and has fantastic environmental, ecological, cultural, and recreational values.”

The Trust is seeking further funding to continue its restoration project.

Mike said the funding would be used to complete woody weed control in the first area of the project with a focus on old man’s beard control and any willows and blackberry missed in the first round of removal. The project would then continue to focus on nearby reaches of the catchment.

“We want to continue to protect and enhance this special area as a place for the wider Christchurch and Canterbury community to enjoy and treasure for generations to come.”

Mike Patchett is also the Deputy Chair of the Christchurch West Melton water zone committee – a joint committee made up of community members, rūnanga and local councils.

Ōtūkaikino River is undergoing a makeover, courtesy of biodiversity funding and hard work from our partner organisations.