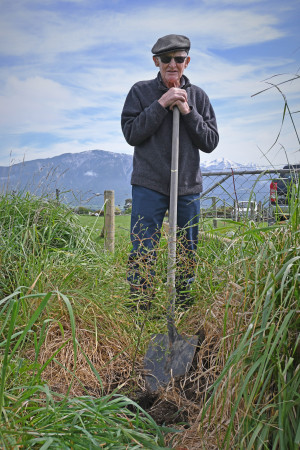 An area of a Kaikōura farm is being restored to wetland, while balancing the protection of freshwater values and productive farm management.

His daughter, and farm manager, Biddy Getz has a no-nonsense attitude and is keen to “just get the job done”.

Together with staff and the wider community, they are creating a wetland that melds both protection and farming together and provides freshwater quality benefits across Kaikōura Flats.

Both Harnett and Getz are well known in the district for their involvement in agriculture and community initiatives and have been farming in Kaikōura for generations. The father-daughter duo take on big tasks.

“(They) think economically, but equally understand the importance of looking after the good pasture and retiring those areas of land that are often wet, that don't grow good grass and really just want to be left to revert to wetlands,” our Land Management and Biodiversity Advisor Heath Melville said.

“What they’re really doing is leaving a legacy project, something that people could look at as a model for balancing farm production and freshwater conservation,” he said. Warrens Creek is one of the waterways benefiting from the changes at Montegues wetland.

Staff have been working with Getz to protect, enhance and invest in freshwater quality on farm, while allowing business continuity – a balancing act in itself.

“It’s been nice to work with willing and motivated landowners who are keen to go above and beyond the bare minimum, setting goals to get better outcomes for freshwater, alongside other improvements on-farm,” Melville said.

Having grown up on a dairy farm, Getz has seen stock numbers intensify over the years and was motivated to learn how to balance conservation efforts with the viability of the farm.

“Once I got my head around the project, it was something that I had wanted to see on the family farm and enjoy the challenge of making it happen,” she said.

Her sustainability project was furthered when a report on catchment recovery, following the 2016 earthquakes, recommended a set of actions that landowners, community and governance organisations could undertake to protect and enhance freshwater values, habitat, and biodiversity.

Their wetland was found to be home to 1,845m2 of critical source area (low point in the farm where water accumulates), which could be depositing sediment and nutrients into waterways and putting the quality of freshwater ecosystems at risk. This area is now being restored to Montegues wetland.

Some of the actions taken included:

Within 12 months of the project starting, native cutty grass regenerated in the overland flow path/wetland and was abundant, increasing in the spring and summer months, providing good filtration. With weed control and the poisoning of willows, natives can now start to thrive in the area.

Through landowner commitment, funding from the Kaikōura Plains Recovery Project (KPRP) and the Kaikōura Water Zone Committee’s on-the-ground actions for freshwater fund, Montegues wetland is fast becoming a great showcase of what collaborative effort can create.

Local landowners and managers who are interested in assistance or resources for protecting or enhancing wetlands on their property can get in touch with our Kaikōura office by calling  03 319 5781.

All photos supplied by Biddy Getz and Heath Melville.