Implementation of a non-native predatory fish barrier at Haldon Pasture to protect the endangered Canterbury Mudfish (kōwaro) is underway. This collaborative endeavour is a landmark Environment Canterbury – and national – project, the first of its kind in the Southern Hemisphere.

The Canterbury Mudfish is the most threatened of all New Zealand's mudfish species, with a ‘Nationally Critical’ conservation status. Ngāi Tahu consider it a Taonga species, with protected mahinga kai significance.

The project will protect this threatened species using brand-new technology to demonstrate industry leadership in sustainable farming. Installation of the electric trout barrier will allow mudfish to expand into the lower reaches of the site and stop the predation by trout, therefore functioning as a safe nursery for future projects and replenishing drought affected areas. This technology could revolutionise native fish conservation at sites threatened by trout across the region.

It will lead to a 10-fold increase in spring-fed stream habitat for the threatened mudfish – going from 880m2 to 8,000m2 – in the Waikirikiri/Selwyn River catchment.

Haldon Pasture Springs, located between the Waikirikiri/Selwyn River and the Hororata River, was chosen as it is a key location with a strong presence of kōwaro, as Selwyn Waihora Zone Delivery Lead Johannes Welsch explains: “This particular mudfish population has been able to get through the last three years of drought and bounced back in the past year, which was much wetter. It is one of the best habitats, and spring/stream systems, we have left in Selwyn, with almost no impact or modification by agriculture. It is also mostly willow and weed free.”

The collaborative project has received a significant funding boost from Fonterra’s “50 Catchment” initiative. It is also jointly funded by Environment Canterbury, the Department of Conservation, the Selwyn Waihora Zone Committee and landowners.

Department of Conservation Senior Ranger Anita Spencer said: “This idea has been germinating for over five years, so it is fantastic to see it progress due to the committed landowners and the support of many organisations. If successful it will lead to a much larger secure area for mudfish and be a significant milestone in mudfish conservation.”

Charles Fergusson, Head of Farm Source for Canterbury, Tasman and Marlborough at Fonterra, said: “As we increase our involvement with communities around the country to improve the health of our waterways, it was really important for us to support the efforts to protect the Canterbury Mudfish. We’re really pleased to support this exciting project.”

The project is expected to be complete early May 2019, just a year after its launch. 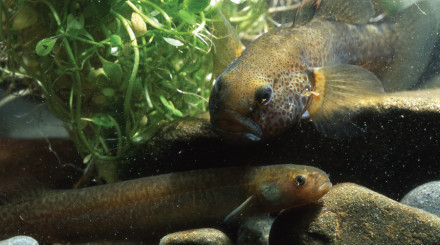