A collaborative effort between local and Central Government is helping to protect the awa / river Rangitata from the debris of an eroding landfill.

Rubbish from the surface of an old landfill site, which sits on a small cliff on the southern bank of the awa / river at Peel Forest, was exposed when the bank was eroded during the 2019 December flood.

With a mix of funding from local rates and the Ministry of Business, Innovation and Employment’s Kānoa – Regional Economic Development Unit, Timaru District Council and Environment Canterbury has worked together to restore flood damaged banks and stop landfill from making its way into the awa / river.

Works on the awa / river were completed in November 2021, prior to the summer flooding that hit Waitaha Canterbury over December 2021 and January 2022, during which time the terrace held up, proving to be effective.

Environment Canterbury Councillor, Ian Mackenzie said the mitigation works would not have been possible without the Covid-19 co-funding from Central Government.

“In partnership with Timaru District Council and Central Government, we were able to achieve a robust temporary solution to the exposed and eroded landfill bank that will protect the Rangitata from most flooding events, allowing time for a permanent solution to be found,” he said.

In 2020, Timaru District Council consulted with Te Rūnanga o Arowhenua and other key stakeholders including neighbouring landowners and Environment Canterbury, on a plan for repair and stabilisation works to safeguard the bank and awa / river from further erosion and flood events.

Timaru District Council Group Manager Infrastructure Services Andrew Dixon said they were pleased to have been able to work with Environment Canterbury and Central Government to deliver the plan.

“The plan included using shingle from the centre of the awa / river to build a terrace at the base of the cliff, planting flood protection trees and realigning the channel to direct the main flow towards the centre,”

“In taking nothing from or adding anything to the awa / river, it’s mauri (essence) would remain intact,” Mr Dixon said.

Timaru District Council and Environment Canterbury are continuing to work together to improve the banks of the Rangitata.

Flood protection trees will be planted in winter 2022, and investigations are underway by Timaru District Council to test the soil for contamination, establish leachate testing wells, and develop the long-term plan for the landfill itself. 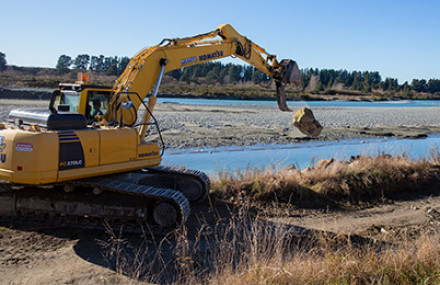 Find out about flood recovery works following the major flood event in December 2019.