Vessel runs aground in Kaikōura

Our coastal response team was alerted on Sunday 31 July to a 40-foot vessel that ran aground off the Kaikōura coast.

Our coastal response team's role is to plan for and undertake any action to minimise any environmental impact.

There will be no further updates for this response.

The 40-foot vessel which ran aground in Kaikōura over the weekend has been pulled onto the gravel shore at Gooches Beach, and work to remove it has begun.

A salvage company has been engaged by the owner/their insurer to break the vessel up and remove it off the beach. This work, which includes removing oil from the vessel's tanks, began at low tide today.

Removal is estimated to take five to seven days to complete. Our local staff will monitor the removal of the wreck.

Environment Canterbury regional on-scene commander Emma Parr thanks the community for supporting the vessel owner and response staff during this time.

"Thank you to the locals who got stuck in and helped the owner with this incident. Their contribution has not gone unnoticed," she said. 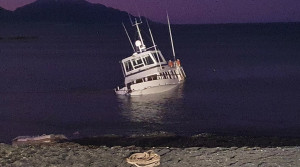 The grounded vessel in Kaikōura is now securely on the beach.

Environment Canterbury regional on-scene commander Emma Parr said a small amount of diesel has leaked from the vessel and has since dispersed.

“Staff will continue to work with the owner and salvors to ensure the fuel is removed from the vessel tomorrow and will respond as needed."

"We’re asking people to keep away from the area while the recovery of the vessel is underway.”

The owner of the 40-foot vessel which ran aground off the Kaikōura coast overnight is continuing efforts to get the vessel ashore, with support from locals.

Environment Canterbury’s regional on-scene commander Emma Parr said the vessel is approximately 150-metres away from the beach and is secured to the shore.

“A positive change in weather conditions means it is likely the vessel will be towed up on to the beach this afternoon,” she said.

“This will allow for fuel removal and salvage. We are monitoring the situation and planning for any significant release of oil.”

“I just want to take this opportunity to thank the community, who have been a great support in helping get this vessel ashore,” she said.

Further updates will be made if there are significant changes. 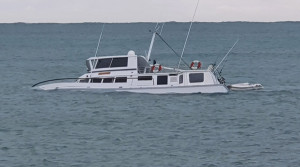 Our coastal response team was alerted late this morning to a 40-foot vessel that ran aground off the Kaikōura coast overnight.

“Four crew members were rescued and are safe and well."

“The vessel has multiple steel fuel tanks with around 1,300 litres of diesel on board,” she said.

“We aware of the delicate ecosystem in this area and are working to minimise any potential impact.”

“The current weather is not favourable, with a strong cold southerly. The owner, along with help from locals, are attempting to tow the vessel, with plans for fuel removal and salvage of the vessel,” she said.

“We will be working with other response agencies throughout the day."

On Sunday, 31 July our coastal response team was alerted to a 40-foot vessel that ran aground off the Kaikōura coast.

It ran aground, into rocks, approximately 200 metres offshore. The four crew members were rescued and were safe and well.

The vessel, with multiple steel fuel tanks, was carrying around 1,300 litres of diesel on board.

How was the vessel removed from the rocks?

Conditions were initially not favorable for this operation, but by Sunday night the vessel was securely on the beach, thanks to locals towing it ashore.

The owner, along with help from locals, have been leading the operation. Environment Canterbury has been monitoring and preparing for any potential environmental impacts.

Who is responsible for the vessel's removal?

The costs of a marine oil spill response undertaken by Environment Canterbury can also be recovered from the owner/insurer.

What are the environmental impacts?

We know a small amount of oil leaked from the vessel by the sheen seen on the surface of the water. This is likely to have evaporated and dispersed quickly with weather and tidal movements. No further oily sheens have been seen since it has been secured on the beach.

There has been some debris removed from the water from the damaged vessel, and contractors have been tasked with collecting and removing the debris from the surrounding environment.

If you do see floating debris or any signs of oil on the water, please contact us.

Is it okay to swim in the area?

It is important to stay away from the area while the salvage operation is in progress and to be cautious of debris that may be floating under the water’s surface.