Transforming McCullochs Bridge, one planting day at a time 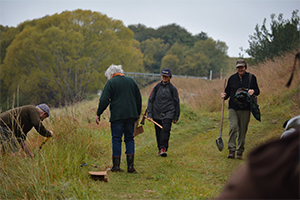 Volunteers at the latest planting day.

A terrible weather forecast didn’t stop a small, but enthusiastic group of volunteers from planting about 450 natives at the Waihao River at McCullochs Bridge recently.

The site, adjacent to Waikakahi Valley Road, has had planting days there for the past three years, with funding from us and other organisations.

The weather held out on the day just long enough for the volunteers to get all of the seedlings in the ground, which was then followed by a sausage sizzle as a reward for their collective hard work. Our southern zones’ biodiversity officer Kennedy Lange said the community’s turnout was pleasing to see, in spite of the inclement weather elsewhere on the day.

“We’re seeing a bit of a crew coming to these planting days now, and the project itself is building quite a core of community support which is great to see,” Kennedy said.

With the third and final year of planting days now complete, Kennedy said he hoped there would be an appetite from the community to continue the good work already in place.

“This is the third year of planting now. If I think back to the area before the planting days, it certainly seemed daunting at the very start.

“But with plenty of boots on the ground, we’ve made significant headway. Now there’s been three years of planting, you can certainly see it’s come together and the area we have covered.