Crop residue burning season is upon us, and it is important that rules and requirements are followed to manage the adverse effects.

Reports of ‘out of control’ fires and concerns about smoke, ash and visibility, are common through the late summer.

While the fires are generally well-controlled, and this is a permitted activity under the regional plan, there can be a substantial impact in our community.

Fire and Emergency New Zealand (FENZ), Federated Farmers, Timaru and Waimate District Councils, the Foundation for Arable Research, and Environment Canterbury continue their interagency approach this crop burning season, providing information to both those who undertake crop residue burning and those impacted by it.

Southern zone lead Brian Reeves says that this summer, the agencies will work together to upskill and inform both groups in the practice and management of crop residue burning.

"We are taking the community’s concerns seriously and will be looking at increased, proactive communication ahead of the season, and exploring monitoring options to understand localised effects and patterns of smoke and ash distributions."

Where crop burning is permitted

Inside these Ashburton and Timaru buffer zones, anyone wanting to carry out crop residue burning must have a resource consent.

Outside of the buffer zones, including in Waimate, crop residue burning may be carried out, provided a smoke management plan is completed.

In addition, FENZ has seasonal restrictions and permitting requirements, and, even if burning is within the Environment Canterbury rules, farmers need to check if the location of the fire is in an open, restricted or prohibited fire season. They can find this out at checkitsalright.nz. 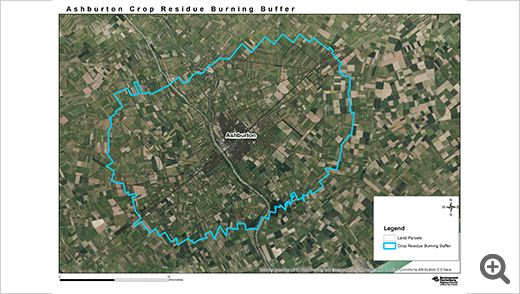