A long career in education, a passion for science, and a keen interest in trout fishing has led John Cruden to his new role on the Orari Temuka Opihi Pareora (OTOP) Water Zone Committee. 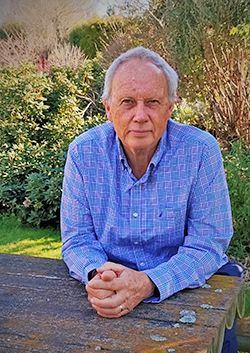 John, whose teaching career spanned 30 years - seven of which as principal of Opihi College in Temuka – has long been interested in protecting our natural resources. He discovered the role of the Zone Committee through his membership of the Central South Island Fish and Game Council.

While on the Council in 2015, John said he was able to focus more on the plight of the local waterways he loved to fish.

“That was when I realised the local rivers really were up the creek without a paddle. I was concerned about them but didn’t think I had a way to make a difference,” he said.

John moved from Nelson with his young family for a teaching gig at Mackenzie College in 1994, unsure if the family would enjoy their new home.

“I’d taught for seven years at Nayland College in Nelson before making the move south to be head of science at Mackenzie College,” he explained.

“When we arrived in 1994 in South Canterbury, we had no intention of staying as long as we have. Our kids were born in Nelson, and we were raising a small family. But we absolutely adored it, and we’re glad to have stayed,” he said.

Bigger and better in South Canterbury

Eleven years later, in 2005, John was offered the principal role at Opihi College.

“(The principal role) is a challenge for any teacher, the workload is high and it’s a tough act balancing the work with conflict resolutions.

“There’s the night-time meetings as well and finding ways to meet students’ needs, which means your schedule and family time gets a bit mucked around,” John said.

John moved back to Mackenzie College in 2012, and joined the Fish and Game Council after that.

“Fortunately, I found an ad about the water management committee, and that seems to be focused on righting water quality. I attended my first meeting recently and just loved it – the discussions, the presenters, the opinions, everything,” John said.

Adding value to the committee table

His scientific background paves the way for his thinking, and “allows the science to drive decision-making”.

John said he is most looking forward to strengthening his relationship and knowledge of Māori customs, such as mahinga kai.

“That is important to me, through the Treaty of Waitangi, and I want to ensure I’m walking alongside Māori and their customs along the way. I look forward to placing importance on that relationship at the table.”

John is one of two new members on the Committee. Sue Eddington has been co-opted for this financial year, and Glen Smith was reappointed.

Find out more about the role of the Orari Temuka Opihi Pareora (OTOP) Committee.