A recent check-in on endangered native fish species at a spring creek near Omarama shows that a biodiversity project is likely to be paying off. 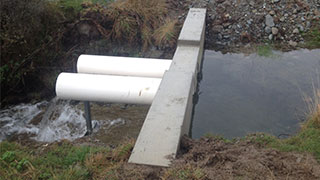 It has been eight years since a collaborative project was completed to protect the habitat of the rare lowland longjaw galaxiid (Waitaki River), bignose galaxiid, and other native fish in a small spring-fed tributary of the Ahuriri River.

The exciting news is good numbers of the longjaw galaxiids, as well as some bignose galaxiids and large upland bullies, have been spotted after a recent survey.

"It was great to see 17 longjaws from the traps in the top spring and another seven in the traps lower down the stream. This is an indication that the fish are doing well and there are good numbers in the stream," said Dean Nelson, Department of Conservation ranger.

There are only seven sites where the Nationally Endangered lowland longjaw galaxiid is found in the Mackenzie Basin, most of them just small spring-fed streams like this Omarama one.

Additionally, introduced macrophytes such as monkey musk are being controlled as they impact on the fish habitat by binding up the gravel which the fish need to spawn in.

“It’s given us a great snapshot of what we could have in our waterways,” he said.

Richard said it’s an awesome example of what a collaborative effort can achieve.

“The three-way partnership has worked really well. I’m excited to see how things progress from here,” he said.

The project, which was a partnership between the landowner of Omarama Station, the Department of Conservation and Environment Canterbury, involved fencing off the springhead from livestock, the addition of a fish barrier to prevent trout from predating on the native fish, trout relocation below the barrier, and ongoing monitoring of the native fish.

The Upper Waitaki Water Zone Committee is also proudly supporting the project. Its role is to work with the community to develop actions and tactics to deliver on the Canterbury Water Management Strategy. It recommends these actions and tactics to various agencies for implementation, including councils, through a Zone Implementation Programme (ZIP).

The committee also supports a wide range of biodiversity projects in the Upper Waitaki region.

Lake Ruataniwha plan for reserve on the agenda

Upper Waitaki Water Zone Committee chair Simon Cameron's latest update and invite to their next meeting on Friday 20 May.