McIntoshs is a stretch of berm on the north bank of the Waimakariri River, on Ferry Road east of Kaiapoi Township. It’s a popular fishing and whitebaiting spot with a picnic area.

Walkers and cyclists can travel along the top of the stopbank from Kaiapoi, through McIntoshs to Kairaki beach, with views over the river and bird watching opportunities along the way. 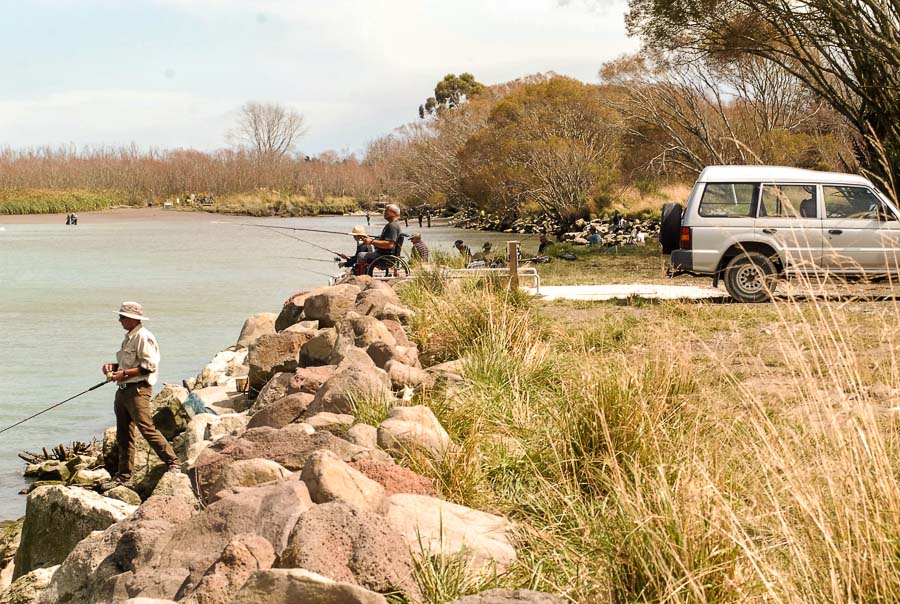 Located on the north bank of the Waimakariri River between Kaiapoi and Kairaki Beach, McIntoshs is a popular fishing and whitebaiting spot with a picnic area.

The Kairaki Beach entrance opens onto the river mouth and Pegasus Bay. The main entrance point to McIntoshs is from a carpark located on Ferry Ave. McIntoshs can also be accessed on foot or by cycle from Askeaton Reserve, Kaiapoi, Featherstone Ave and Kairaki.

Dogs must be kept under effective control at all times. No barbecues are provided but visitors are welcome to bring their own, provided they are gas-only and used in areas clear of vegetation.

Light no fires. Dial 111 immediately if you see smoke or flames.

Wheelchair access fishing platform - Wheelchair anglers can contact us for a key. Users must hold a current fishing licence. Breaches will result in confiscation of your key or refusal to supply a key for the following season.

Picnics - A variety of informal picnic settings at McIntoshs with developed picnic spaces at Kairaki Beach.

Kairaki was an important mahinga kai area for local Māori with an abundance of shellfish and fish species.

Early Pakeha settlers in the Kairaki region used it as a cattle rearing area. The first European settler at Kairaki was David Tibbitts. Later settlers included Kenneth and Grace McIntosh who emigrated from Scotland. The couple settled in Kaiapoi and had 12 children including Hector and Robert.

Hector went on to become mayor of Kaiapoi Council between 1924 and 1927. His brother, Robert, was elected Mayor of Rangiora in 1925 and the two brothers established the McIntosh Shield to encourage friendly rivalry between the two towns.

Kairaki beach became a favourite picnic spot during the 1860s and the Kaiapoi Volunteer Rifles had a range out in the adjacent sandhills. The original Beach Road was a track across the wetlands, but it was not until the 1870s that a stable road to the beach was made.

By 1931, works to straighten the Waimakariri River’s lower reaches were completed. These were carried out to move shingle and floodwaters out to sea at a faster rate than the river's natural meandering form would allow. However, the newly excavated entrance through the sandhills to the sea was a failure when the river continued its old course.

It was not until the flood of 1940 that the river abandoned the Brooklands Lagoon and made straight for the sea forming today’s mouth. Many ships plied this section of the river, with Kaiapoi serving as a trading port from the early 1850s until it officially closed in 1969.

Please note this management plan is under review and may not reflect current guidelines and regulations.

If you have questions, please contact the Duty Ranger on 03 353 9007 or by email duty.ranger@ecan.govt.nz.