The resilience of our transport network will continue to be tested as extreme events occur more frequently, and with greater severity.

Long term, we need to shift from a network that can recover, to a network that is resilient to adverse events, and which continues to function during adversity. Canterbury regularly experiences flooding events, a natural hazard that includes river flooding, surface flooding and coastal inundation. These events can be particularly problematic in Canterbury given our heavy reliance on bridges for river crossings on critical freight and visitor routes. In total, there are some 1,900 road and rail bridges in the Canterbury land transport network.

The changing climate is expected to increase network vulnerability, with increased exposure to risks associated with sea level rise, coastal erosion and storm surges. Much of the region is low-lying, and key transport corridors (including State Highway 1 and the Main North rail line) are coastal. 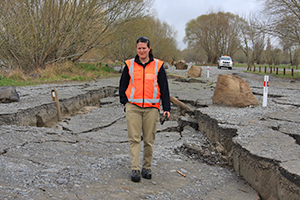 The region's exposure to earthquakes is also well known. The 2010 and 2011 quakes caused significant damage to the network in the Greater Christchurch area and the 2016 Kaikōura Earthquake ruptured more than 24 faults. The largest of these was a horizontal displacement of 12 metres on the Kēkerengū Fault and a vertical displacement (uplift) of 9m on the Papatea Fault. Along 110km of coastline, vertical movement ranged from subsidence of 2.5m to uplift of 6.5m. Landslides continue to be an issue in North Canterbury.

The disruption caused by earthquakes affects not only the road but also the rail network, with the potential for significant negative impacts, as shown by the 2016 Kaikōura quake. 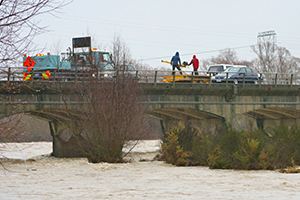 These risks place pressure on our transport links and have the potential to isolate districts or communities. In many instances alternative routes that must be used are indirect, resulting in extremely long detours, or are unsuitable for certain vehicles (such as high-productivity motor vehicles).

These impacts were well illustrated by the flooding of the Rangitata River in late 2019, which effectively cut the South Island in two, resulting in disruption to food delivery services to the lower South Island.

Measures our region is taking to improve network resilience

The Canterbury Regional Land Transport Plan (RLTP) has put greater emphasis on network resilience as a strategic investment priority. It is expected that road controlling authorities will work to directly address this priority in the future.

There are a number of projects underway or in planning which will increase the region's resilience to adverse climate events and/or natural hazards.

Resilience projects on the horizon

The following projects have been identified in the RLTP as presenting resilience issues for our regional transport network, but are not yet funded or confirmed.