The mouth of the Hakatere / Ashburton River is a hugely important place for the Ashburton region for many reasons. It has cultural and historical value, provides a range of recreational opportunities, and is a vital biodiversity hotspot, visited by nesting and roosting birds. 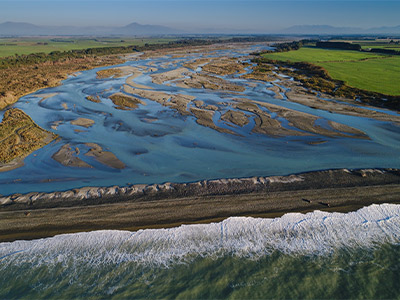 The mouth of the Hakatere / Ashburton River

But ongoing concerns over the compatibility between these values led to the decision to develop a management strategy for the area.

The development of the Ashburton Hakatere river mouth strategy (PDF file, 3.49MB) was led by us with input from landowners and custodians, including the Ashburton District Council, Department of Conservation, Land Information New Zealand and Te Rūnanga o Arowhenua.

The strategy, which was produced by consultants, provides a variety of recommendations to protect and enhance the internationally significant bird habitat as well as to provide recreation opportunities and cultural values.

A sanctuary for wildlife

One of the study’s key recommendations is the development of an enhanced area for birdlife at the river mouth.

The establishment of this area is a way we can recognise and protect the significant biodiversity values of the region. It can also serve as a driver for changing the culture of use.

In response to these recommendations, we have developed a plan to protect and enhance the biodiversity values of the site, while allowing access to recreational activities.

A second, modified plan was created after consultation with individuals and groups that objected to aspects of the first plan.

A meeting was held with key stakeholders in late 2019, in which the implementation of the Hakatere / Ashburton River Mouth Strategy was discussed, and an implementation plan was presented.

Regular visitors to the river mouth will see a continuation of the work undertaken over previous seasons to protect nesting colonies from disturbance and pests. New work over the next two years will include:

The Hakatere/Ashburton River – reviving a lifeforce